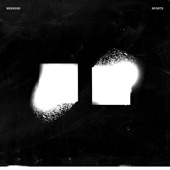 Weekend’s Sports opens with “Coma Summer,” the record’s prettiest and most tuneful track. An undeniably catchy anthem—don’t expect to hear it in the background of a CW show anytime soon, though—it’s also a song whose title is a handy guide to understanding the album. There may be sunshine at its core, but “Coma Summer” exists under layers of dreamy, underwater echo and feedback of the rock-in-the-lawnmower variety. This machine sound ebbs and flows, obscuring all but the faintest hint of Shaun Durkhan’s deadpan vocals. In short, Sports is like pop music post-concussion: there’s a hint of sweet relief, but it’s trumped by a perpetual, disorienting ache.

San Francisco’s Weekend is a band so shiny and new they’re drowning in comparisons. The three-piece formed just last year and has already been mentioned within the ranks of noise-pop godfathers like My Bloody Valentine, Jesus and Mary Chain, and Sonic Youth, as well as contemporaries like No Age. While these parallels drawn aren’t untrue, they tells us exactly nothing about what sets Weekend apart from the hordes of other early ’90s shoegaze devotees currently picking up instruments.

No, what makes Weekend stand out is an unabashedly dark, brittle, and at times austere palette, grounded by Durkhan’s hollow, haunted delivery. What’s better, the gloominess of Sports never detracts from just how enjoyable it is; the album is too charged with ferocious energy to be depressing. Its pop heart may be drowning in a grimy post-punk sea, but in the album’s best moments one can hear it kicking to stay afloat. For example, charging out the gate, “Coma Summer” and “Youth Haunts,” which comprised half of the band’s first 10” out last fall on Mexican Summer, open Sports with a stinging combination. Perhaps darker than its predecessor, “Youth Haunts” starts part howling wind, part far-off AM radio din, but eventually breaks its tense nature by crashing into an up-tempo conclusion.

While most of the songs on Sports have this kind of steady momentum, some too often trip up and stumble, saturated with guitar that hisses like a broken water main. Drummer Abe Pedroza keeps urgent time, though his beat is muffled, secondary to Kevin Johnson’s guitar drone and even Durkhan’s ever-fading vocal takes. The album’s weakness is its tendency toward listlessness and repetition, particularly on swampy tracks like “Monday Morning” and “Veil.” Highlights like “Monongah, WV” and “Age Class,” on the other hand, exploit the band’s talent for tight rock song structure, playing like the Strokes but at a woozy speed. “Age Class” and “End Times” are even, almost danceable, but their hooks are inevitably subsumed by the broken-water-main-splashing-on-rock-in-the-lawnmower chaos.

Sports isn’t meant to be a crowd-pleaser, but it isn’t meant for headphones either. It’s meant to fill a room, to knock some brains against the insides of some skulls, to force one’s friends to keep one awake. Though it’s their first time out, Weekend has created a record that bellows out of speakers, that bites and sometimes doesn’t play fair. Though uneven in areas, Sports packs a sucker punch. Best sit still and brace yourself.