Other Records by Ween 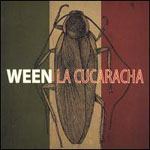 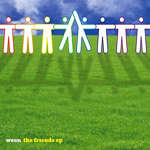 The title track of Ween's new mail-order only EP is a gay-disco send up that clearly desires to be the greatest Erasure song in over a decade, and wholeheartedly succeeds. Notice how I just used the words "Ween," "gay-disco," and "Erasure" in the same sentence. If that alone won't get you to spend eight dollars, then nothing will. And Ween being Ween, it's not enough to simply sound like everybody's favorite disco fops, Dean and Gene need you to believe that they probably stole Vince Clarke's laptop, or at the least held a gun to his head to have him personally produce the song. It's a parody to be sure, but as in all of their style exercises, Ween's reverence for the genre is obvious, and clearly the result of Gene indulging in one too many late night karaoke renditions of "A Little Respect" or "Love To Hate You."

That the rest of the EP doesn't measure up isn't surprising, nor should it be construed as a disappointment. Ween routinely uses their mail order Chocodog label as a means to dispense fully formed tunes that will delight the hardcore aspects of their fanbase but that aren't quite up to the standards set by the songs on their full-lengths. The four remaining tracks on Friends follow this template.

For starters, you get "I Got to Put The Hammer Down," which is the kind of song that Dean and Gene can bang out before breakfast. It's difficult not to crack a grin at a two-minute drum-machine ditty with a protagonist who "lost [his] cherry / on a side street / to a dirty little women (sic) / in the backseat," but it's clearly inferior to the song that precedes it. "King Billy" is a similarly unnecessary, if mildly amusing, take on dub reggae that at least manages to contain the trumpet charts and carnival organ that one would one expect from the genre.

The last two songs exhibit a little more effort. The "Bananas and Blow"-style tropical rock of "Light Me Up" (as in - "before you keeeeel me!") is all Gene playing the role of a Tony Montana-inspired drug lord, marking at least the 17th time he's utilized a mildly offensive faux-Latino accent on a Ween song. And "Slow Down Boy" is another attempt at that Ween staple: the big '80s soft-rock ballad, this one jacking both chords and tempo from Spandau Ballet.

As a summer stopgap for their new full-length this fall, Friends works fine. The title track is quality, plus their fanbase eats this shit up. Besides, these songs are probably amazing live. Ever see the part on their Live in Chicago DVD where the entire sold-out audience is swaying in perfect time to the chorus of "The Blarney Stone"? That's some shit.