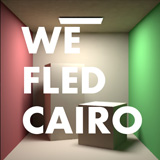 Though I can attest to the fact that Conrad’s recent lamentation of Ottawa’s “anemic” music scene is as accurate as it is utterly depressing to anyone bound to this place by work or school or habit, as I am, I’d like to add an at least marginally hopefully addendum: there is a position for local music-lovers, creators, and fans alike, from which this city’s drought of traditional, supportive resources—the perpetual dearth of live venues, the dwindling supply of record stores, and, as ever, the apparent nonexistence of a living, breathing, money-spending audience—don’t seem all that bad. For a city that boasts no indie success stories, where failing to develop any kind of significant fanbase even a mile outside of our municipal borders is all but guaranteed not just because so few “make it” in this business but because literally nobody from this city has, moving past giving up is an increasingly popular notion. When failure is a given, pretenses melt away like a six-foot snowbank; creating becomes an act performed for its own sake, and the bands who keep going do so solely because they earnestly enjoy it.

Last year I reviewed a cassette-only EP by Male Nurse, another talented but frustratingly unrecognized Ottawa musician, and I wrote that the record was “made by friends, for friends, for no reason other than that making music is fun.” At the time I assumed Male Nurse’s modest, communal approach was just a personal preference, a decision made at some point to actively stand outside of the system. But those unpretentious goals make so much more sense in the context of Ottawa as a whole, where nobody’s getting their music out to listeners beyond friends and friends of friends even when they try. The general sense here, almost overwhelmingly, is that something needs to change.

We Fled Cairo, the undeniably talented but resolutely laid-back post-rock duo formed by Ottawans Dave Mandia and Richard Monette, have, not unlike Male Nurse before them, managed to sidestep the problem altogether. Confronted by the spirit-crushing Nothingness of a pale-gray government town, a capital city which, in Conrad’s words, “strangles the life from artists and listeners alike,” We Fled Cairo persist—their music flourishing, in its humble way—because they simply do not care. Which is not to say that they are world-weary cynics or eye-rolling ironists; their uncaring is neither of the political variety (this is a far cry from punk rock) nor of a particularly post-modern one (this isn’t shitgaze, either). Rather, what We Fled Cairo don’t care about is you, which is to say they don’t care about an audience. Mandia and Monette have been playing together for three years and Adult Braces, self-released this month and available for free online, is not only their debut full-length but also the first piece of music they’ve ever recorded and released. Or at least released to the public—it’s hard to say how much material these guys have come up with over the course of three years, how much of it languishes not in the local section of a defunct record store but within the cold confines of an external harddrive somewhere.

This band is unique for the city in that, despite having been together for such a relatively long time (three years is triple the lifetime of an average Ottawa outfit), they are not especially well-known even here. Though they’ve shared bills with bands as varied as Growing, Animal Hospital, and Woodhands, in total these guys have only performed live maybe a dozen times, at least half of which took place in the basement of a house at which I used to put on tiny shows, and the other half of which were typically separated by months of apparent inactivity. Why is their output so disparate? Why does this band seem so…taciturn? Well, that’s just it: they only play when they want to because for them, why else would they play? This is Ottawa; there’s no money to be made here, no lucrative record deals to procure, no rabid fanbase to be developed. The bands in this city who have gone and tried for those things, the bands whose persistence required enormous willpower and effort, the musicians who, despite knowing deep-down that it just wouldn’t happen, wanted all of that vindication and support and success so badly, those bands burn out and give up. Or they move to Toronto. Adult Braces exists, three years after the band that produced it began performing together and started writing many of the songs that appear on it, because there was never any pressure for it to exist in the first place. Adult Braces succeeds because it doesn’t need to: this is fun, thoroughly unpretentious post-rock made by two guys who just really genuinely enjoy writing and recording post-rock songs. Want proof? Check those song titles: nobody gunning for New Yorker coverage calls the most straight-forwardly gorgeous song on their album “Awkward Boner.”

When sometimes-drummer, sometimes-guitarist Richard Monette first told me about Adult Braces, which was released as a total surprise to me despite having kept a pretty close eye on the band since their inception (their discretion is not exactly “secretive,” just casual to the point of silent), he seemed so nonchalantly proud of the record. “If you had told me three years ago that I would have a record available on iTunes,” Richard explained to me, “I wouldn’t have believed you.” He’s not looking for a national tour or endorsement deals or Best New Music; what’s satisfying is having actually just having created something. Adult Braces is an end unto itself, and if people listen to it and enjoy it, that’s sort of a nice afterthought. That sentiment is so endearing, and you can hear it in the music: this stuff is precise and meticulously rendered—their technical proficiency is apparent throughout, especially Mandia’s drumming on the math-rock numbers—but it’s also incredibly light and casual. It’d be easy to pigeonhole this stuff as post-rock, but Adult Braces, devoid of “epic” crescendos and egregiously ham-fisted gestures, avoids the many problems that have come to mar the genre. If you could call something like “Derivative,” um, derivative of post-rock (that’d be more Do Make Say Think, less Godspeed), it’d still be probably the least pretentious post-rock song ever.

Adult Braces is the product of a band that cares enough about their music to make it well, but not so much that they need others to recognize that. I have all the respect in the world for an Ottawa band like Crush Buildings, who, with their remarkably confident Things Luminous, continue to rage against the dying of this city’s light. But it’s refreshing to hear an album that goes gently and is perfectly okay with that—a very good album that sees a crumbling music industry and says, well, here’s my music anyway. “What could possibly be the motivation,” Conrad asked, “to run, full-speed and face-first, into the outstretched fist of this pitiless scene?” Perhaps the solution is simply to walk.