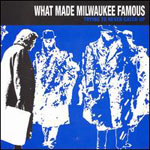 What Made Milwaukee Famous

Trying To Never Catch Up

We all have day jobs here at the Glow. [Ed.: Or night shifts.] Mine is at the UCLA Daily Bruin, where I’m Arts & Entertainment editor. The level of insightful commentary and overall writing capability is a sight less than it is here at CMG (goes without saying, obviously) but we’re all a bunch of indie geeks, so who better to listen to this record a few times with me? Tonight, I have a few of the Bruin’s finest over to celebrate one Alfred Lee’s 22nd birthday, so we’re jamming this record and talking it over. Care to join?

“Sounds like Megaman -- Cutman’s level,” says Mark, the Bruin’s music editor and an all-around stand-up guy. Mark has stopped counting what drink he’s on. Jeff, the apartment’s resident videogame expert (who also happens to be in The Jumpmen -- UCLA’s foremost a cappella videogame ensemble) says, “it sounds nothing like Cutman.” Shot down. “There’s a Q and Not U falsetto,” says Greg. Me, I think the voice filter sounds like the Strokes, but who am I to talk?

This is where Alfred steps in: “have we talked about the Justin album yet?” “It’s awesome,” I reply. Alfred: “it’s okay.” This record does not sound like Justin Timberlake. Mark comes over to sit next to me. I don’t think he’s digging this record, but his tastes skew closer to Sonic Youth and the Mars Volta. Like I said, he’s our, um, music editor. Then again, we gave the new Sufjan record 3 stars. “Actually I’m digging this now,” Mark tells me. “Even though it does sound like shoegaze Strokes.”

He’s half right. The vocal filters on many of the songs give singer Michael Kingcaid an undeniable resemblance to Julian Casablancas, but the shoegaze guitars only last for a song or two. “Hellodrama” is unfiltered, fantastic and exuberant rock that evokes the Cars and drops a few handclaps in the chorus. Nick, film writer: “it’s like, each song sounds different. Are they comfortable in their identity or have they found it yet?” Nick’s been reading a lot of Hemingway. Regardless, it’s a good question. This record originally came out in 2004 before the current Barsuk reissue, at the tail end of the indie boom (before the Killers, natch), and many of the songs echo that fleeting era -- the furry, fuzzed-out singing, the catch-me-if-you-can melodies, the torn-up-heart emotionality. This is the Strokes’ first record without its adherence to formula and form, with better guitars and bigger chords. And, you know, more fun.

“This would sound okay next to the Long Winters,” Greg, my roommate and UCLAradio.com general manager, says, referencing one of his favorite albums of 2004 and a fellow Barsuker. A horn fill enters and the guitars climax. “I’m getting a surfboard,” Greg tells me. “That’s awesome,” I reply. “The album?” Jeff says. “That too.”