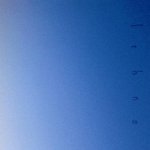 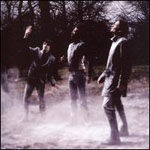 Much like the name would suggest, White/Lichens is a bit of semantic hand-holding: engineer Jeremy Lemos and guitarist Matt Clark of duo White/Light make music with Rob A.A. Lowe of Lichens and 90 Day Men fame. The coupling's a logical move, as is the band naming, because Lemos, Clark, and Lowe hold positions of note in the Chicago noise and drone scene, the one that dabbles in a little bit of minimal everything and ends up sounding not very minimal at all. The three are also usually qualified as formidable live presences, gathering around a smattering of local spots (the Hideout or, say, the Empty Bottle) and gaining reputations for putting on marvelous shows. Together, the three make sense; White/Light's platinum squalls of feedback and swirling, grinding tones part thinly enough to allow Lowe's patents through, and Lowe in turn brushes away weighty, impatient dreck. In Lichens, Lemos and Clark have a core to mine and then, later, a core to exploit. If anything, Lichens complements White/Light and Lichens complements Lichens, so Lichens complementing White/Light seems to sound like White/Light with a Lichens core, and in time the album reveals itself as baited over the tension of depending on Lowe's piano or voice in the midst of a surrounding storm. Turns out this formula's quickly established and long to unfurl, one part revolving around another with symmetric, plodding precision.

"Revolving" is apt: from its opening bars (?), "Bael" spins a frowsty, low-register band of reverb around the emerging, growling static; a definable space manifests as a piano scuttles through the dark, as the rumbling ribbon speeds and slows, building walls to confine the chaos, urns to collect the burnt-out noise. "Amdusia, Or Amadukias," strangely sweet against the bulk of the album, chimes with bleats and coruscated digital mewling, but even that overt crystallization seems bound to the veiled back of the speakers, trapped in a small space and buffered by yards of linen. Or lace: even at its dirtiest, White/Lichens maintains a regal air, every scouring tone put to tape with loud authority, never merciless but never blinking.

The closest and easiest point of comparison to White/Lichens is Lowe's own Omns album. Where that solo joint explored the limits of Lowe's thinly grouped instrumental means, turning long, rustling passages of howling and bent blues plucking into Third Eye landscapes, White/Lichens attempts something cosmically grander, like a harrowing mass earth exodus and long breach through atmospheric gook. Like The Fountain with less Mogwai and more oily black Space. Appropriately, the thematic conceit behind White/Lichens -- if it owns up to one at all - is one of mashed science-fiction and magick, culling names and spiritual evocation from Alastair Crowley and the Ars Goetia (an English translation of which Crowley published in 1904) and pulling a sense of violence and technological play from Filippo Tommaso Marinetti's 1909 fable-like Let's Murder the Moonlight! about the Futurist movement. The details of these allusions are meek within the context of the record, quoted sparingly throughout the liner notes and the track titles, but the sentiment is engaging (goose-pimply) enough, one of bottled traditions and loyalties admired with the top off, left to dissipate and expand. Calling on long-standing methods and touchstones to create a new space, a future sound indebted to patient study and long incantations, White/Lichens embodies the niche the trio's already helped draft in the Chicago underground.

Which mostly means that "drone" is a shallow term and that the group seems bent on exploring the fringes of their supposed genre or just trying to find a way to quit alienating a lot of potential listeners. Still, White/Lichens can be stubborn, refusing to lapse into any clearly-limned corner and losing a bit of personality in the process. No doubt it's a challenge, this record, and pays bushels for close listening. But where does the challenge end and the new universe begin?