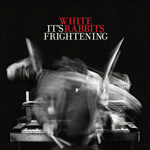 It ain’t easy being an indie rock fan in 2009. As a label it’s otiose in the most frustratingly hollow way, typically more indicative of desired demographics than anything else, and preceding it with the words “I like to listen to…” inspires more smirks and eye-rolls than matte lamé leggings or a pencil mustache. It’s a genre soiled and defiled by tepid, derivative pap, and so the few true contemporary heavyweights—let’s say Wolf Parade, the Walkmen, and Spoon, off the top of my head—get extra credit for molding rancid shit into sculptures so pristine we forget the reek of the raw materials and throw up our hands in joy and surrender.

I mention because Britt Daniel, Spoon’s leading man and the dude responsible for four of the best straight-up indie rock records of the naughts, acted not just as producer of the White Rabbits’ second record It’s Frightening, but also one of its key songwriters. In case it wasn’t clear by that big ol’ 55% at the top of this page, It’s Frightening does not rank among the best indie rock records of the decade, nor even of the young year we’re currently marching through, and so now I sit here wondering how one of the genre’s ablest bodies plopped himself down on the rawk john and helped to shit out not another immaculate jaw-dropper but…this, an entirely pedestrian turd. For shame, Britt; we truly expected better!

White Rabbits are not an especially bad indie rock band. It’s just that, even despite Britt’s involvement, they do so little to distinguish themselves from the glut of undergrad Spoon-soundalikes, the kind PR reps email us about six times a week. If you’re heading into this expecting some second-rate Spoon material, you might only be slightly disappointed to learn that most of this is just fourth- or fifth-rate. “They Done Wrong/We Done Wrong,” the very best song on the record, is about as good as “My Little Japanese Cigarette Case,” the very worst song on Ga Ga Ga Ga Ga (2007). For a more timely comparison, consider that It’s Frightening is to Kill The Moonlight (2002) as Telepathe’s Dance Mother is to Dear Science (2008). Hire a well-known producer, see results: you too can have a pale imitation of a better band’s acclaimed album.

To be fair, this isn’t all the fault of White Rabbits. Judging by the difference between this record and the band’s modest debut, Fort Nightly (2007), it’s safe to say that Daniels is responsible for a lot more here than his role as producer and songwriting assistant might imply. The band’s overwhelming mediocrity seems to have made them conveniently malleable, adjusting their run-of-the-mill indie rock to suit the specific needs of their more distinguished masters. It’s telling that while their Daniel-produced sophomore record wears Spoon-isms on its sleeve, their debut, recorded by Walkmen producer Chris Zane, sported all the conventions of that band. The transition from cribbing the Walkmen’s style to cribbing Spoon’s gives White Rabbits the look of faux-maturation, but don’t confuse a change in sources of theft with any kind of leap forward. These guys are still making the same bland indie rock, but now they sport Daniel’s trademark economy of sound rather than Zane’s atmosphere and tension. Including a little bit of studio chatter at the beginning of album opener “Percussion Gun” is the kind of obvious Spoon signifier that critics and fans love to eat up and shout out, but it feels too much like a lame reminder that Daniel’s doing what he does best behind the scenes, as though we might forget and lose interest. That beefy drum march which kickstarts the number sounds well and good, but even that’s eerily reminiscent of Bow Wow Wow’s “C30 C60 C90 Go”—hardly surprising given the redundant nature of this rawk pastiche.

Their rhythm section (ooh, two drummers!) is serviceable but generally underwhelming, and song by song the record just falls flat. It doesn’t really matter who’s more to blame, the Rabbits or their new muse—this is a great big yawn of a record. It’s also a grubby little smudge on Britt Daniel’s otherwise impeccable service record, a worrying one at that: if It’s Frightening is the product, even partially, of one of this struggling genre’s brightest minds, the task of fighting for this stupid thing just got way harder.