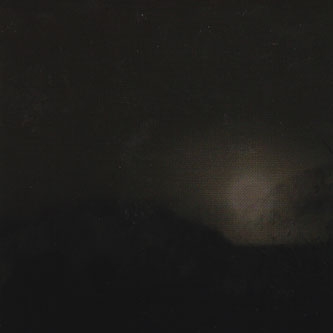 You’ve got to look at black ambient as a kind of inkblot test: there in front of you lies an incriminating mess of paint, the workings of your subconscious hiding in the ink. An easy enough test to rig as any Army doctor will tell you, but not so easy to adjust to the point where it leaves you gagging for more. As far as I know, that’s only recently been done twice successfully—once in 2008 (“Crypt. Flagstones. Coven…”) and once a couple of months back (“Glaciers. Thor. Saltwater.”). And now Type Records round off their evil trilogy with what’s effectively Three Colours: Red, the New Mexico installment of the previous formula with William Fowler Collins as director. The desert/deserted mining towns setting might seem an odd choice given the more fearful immediacy of its prequels (Xela’s crumbled cathedrals and Svarte Greiner’s Norse maelstrom; the stuff that nightmares are made of) but this is certainly the most fascinating, Collins’ debut emitting the originality of a country built on bandits and Parisians. Be warned, however, because the road to Perdition Hill Radio is no Tom Hanks movie, not by a very long and twisted country mile. To make it through this you need the stomach and balls of the Man With No Name (you can imagine the outlaw projecting this shit from his eyes to death-rattle his enemies to death).

So how does Collins imagine his slice of the desert? As infinite static boiling in the sun like dried-up coyote eyeballs, put simply. Pirate radio in Perdition does away with the MCs and instead has you walking the plank; or, er, slowly being eaten by a sandstorm. Once you’ve got past the transitional heat you can see the treats Collins hides in his din—some of them almost tantamount to musical. “Slow Motion Prayer Circle,” despite being the most upright and terrifying of the tracks, packs something like a key-change, I shit you not. Where are you now, people who think these LPs just sound like “a night in the dark on a runway” (my girlfriend’s favourite, that one)? But Perdition feels different to the previous geographical opuses on Type for reasons I can’t quite put my finger on: though physically closest to Hell in terms of latitude/temperature/carcasses, it doesn’t leave me feeling as numb as its Roman or fjord-filled counterparts. There’s a kind of pugilistic high to attain if you can make it through both sides without pausing, allowing the shifting roars and mutant fizz to bathe you like evil-eyed shoegaze. Even the opening “Hour of Red Glare” is positively melodic given its black ambient archetype, with a strong enough Western tinge in its corners to copyright it as authentically sun-baked. Lightning crashes, and I’m not talking Live.

As Westerns go, though, this is definitely beyond Peckinpah and predates high noon for an ancient arena where smoky demons out-scream each other. The twenty-two minute “Dark Country Road” will be the cinema walkout point: country licks fan out into solar destruction, neon lizards retreating into skulls. Like a lot of the album it’s only too happy to dreamily visit damnation upon itself, Collins’ mission to recreate The Pit as barbaric as Pap Finn’s boozing. Perdition can be a record of terrible DTs sometimes—“Grave Robbing in Texas” is every bit as fucked as the Chainsaw Massacre credits it alludes to, and the sacrificial static of “On Perdition Hill” loses the listener in a fog from Pompeii. But that strange rollercoaster “I beat it” buzz sticks with us as we continue, boosting our collective cojones track by track. As “Ghosts of Eden Trail” lets a little clear light through the smog, we will, believe it or not, want more. The constant foreboding and unholy black magnetism works like a steroid hypnosis, no doubt as lethal as the mind-bending sap Collins’ ancestors had to indulge in. There’s something very primal and personal in listening to this hour of Silent Hill-isms, and I’m almost worried about the next Type arrival if they continue with these malevolent gas giants. We’ve had Saturn (Satan) with Xela, Neptune with Svarte, and now William’s take on the Sun. I’m not looking forward to Uranus.