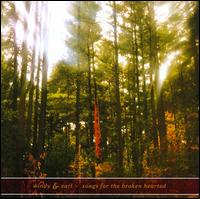 Songs For The Broken Hearted

Love songs can compel one to do crazy, bold things; they seem to imbue relationships with magic. But love is fluid, taken for granted and thrashed, and often it finally dies under strain. From that void of emptiness and despair come the heartbreak songs. This cosmic bond rarely survives the sojourn through hell, to produce an inspiring work like Windy & Carl’s Songs for the Broken Hearted. Suffering through an ineffably sad period in their nineteen-year marriage, these post-rock mavens, who hail from Dearborn, Michigan, have sired a beautiful meditation on the enigmatic force of love.

Windy Weber and Carl Hultgren have been producing dreamy sagas together for almost as long as they’ve been married, and rarely have they descended to such depths of despair. Songs for the Broken Hearted, the duo’s eighth full-length, is ten tracks of feverish and droning atmospheres through which Hultgren’s echoing guitars and Weber’s reverberating voice weave their way. Engulfed in softly-distorted guitars and keyboards, opener “Btwn You + Me” is at once hopeful and foreboding—working as the primer for “La Douleur” (French for “The Pain”), a twelve-minute tempest of grumbling harmonies and whining overtones. “My Love,” by contrast, is a euphoric cloud of reverb moved by gentle bass and guitar. But Weber suggests that love’s scars remain, murmuring, “Who knows what the future brings / My love?” Instrumental “Rhodes” is like a shining light, bursting with glimmering keyboards and an almost imperceptible loop of a horn-like tone in triumphant ascension. There are some dull and aimless moments, but “When We Were” is the awe-inspiring plateau: a wash of distorted guitar that transforms into sharp aches and cries. “The Same Moon And Stars” closes the record in rapture, as a guitar murmurs inside the womb of heavenly harmonies.

Typical of heartbroken songs, Songs for the Broken Hearted can be an acrid nostrum, a mirror of your own hopelessness and despair. Unlike most songs on the subject, these demand particular patience: there is none of the sap, no catches or hooks. But remember that this album is about a battered love that lived. So if you’ve never been into the hideous abyss, or if you’ve just pulled yourself out, its rich movements and colors can reflect too your hope, forgiveness and bliss.