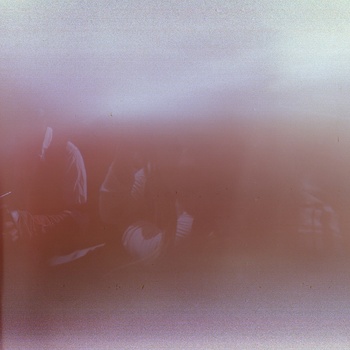 It’s not often distortion is used as a means to take up as little space as possible. But, like a moth crafted from the unlike likes of the Jesus & Mary Chain and early Final Fantasy, Cathedral is an innocuously vanilla debut EP, beating its paper-thin wings between a sheer curtain and windowpane. Without so much as a hint of the gritty residual scuzz or dredge, it is bright, clean, and deceptively slight—deceptively rife with dualities, illusions, and camouflage.

Melbourne’s James Wallace works alone under the Wintercoats name, using a number of elements and a simple loop machine to craft a consistently ethereal concoction of ambient, orchestral folk-pop. And having so many elements (piano, vox, violin, glockenspiel, guitar, keyboards, ukulele, trumpet, and percussion) combine to feel so spare, uncluttered, and illuminated is one of his first deceptions.

Cathedral is four tracks that move in clever, clock-like turns. Yet none of these tracks wind up feeling cerebral or even ambitious—only open, with a light-handed precision that’s so light-handed you’re in danger of not even noticing it. The compositions play with your attention, employing an innocent push and pull, a duality of what is open and what is hiding, in turn crescendoing or hiding in their own folds and layers. All occurring in the peripheral spaces.

“Overture” begins with a flipping loop a la “This is the Dream of Win and Regine,” dashed over with shivering violins. The associations die there though. Wallace’s voice immediately stands Wintercoats apart from the initial Final Fantasy-ness, soft and modest in contrast to the bold abdominal thrusts of Owen Pallet’s stage-center vocals. Where Pallett prefers bold narrative claims, Wallace uses small sentiments that serve as shadows to a relationship, leaving all the details gray, amiss, nebulous. Nothing ever surges in a full, satisfying way, but dives into delicate minimalism with music box chimes and trinkets of sounds that blossom into surprising bursts of lushness.

Transitioning from warmth to delicacy, “Windmill” is a modest love song of sorts decrying the tensions of maintaining a fragile, one-sided relationship. Chimes tinker in over a long extension of strings with trills of violins; it’s a borderline twee-ish lovesong…duet? What’s most disconcerting: if that’s a female vocalist paired up with him for the increasingly repeating chorus, I sure can’t find her name anywhere. And if that’s all Wallace, it’s one hell of an illusion.

Lopsidedness takes a turn for the slightly psychedelic in “Unbearable Thinking,” with plinks and tickings pulling whatever threads of unease were in “Windmill” and winding them as tight as a clock. The vocals come in stronger, the chimes with them building as the mechanics tense and move in practiced degrees and particle-sized increments. His vocal repetitions darkly underscore the song’s tensions with bite and edge—but at times their repetitions become too lost in spell-like chanting. The chimes meanwhile become more incisive, staccato, seem to be moving together like cogs and wheels. The song cascades away from this point, sliding into peals of descending strings and the melting last track.

The end of the EP begins with a jangling of windchimes and plunking chords, wet keyboards, creamy “huh” vocals, and the strongest presence of lyrics yet on the EP. Small clappings and an occasional shaker draw rhythm away from chimes and give the song a quiet, upbeat shuffle. It grows with a sudden raise of urgency, the first instance of urgency on the album, only granted a moment of manifestation.

Cathedral is so slight it approaches the dangerously subtle, given how nicely it fills the spaces you aren’t aware of and given how egregiously likely it is to flutter in and back out again, all beneath the radar. That would be pretty sad. It has its shortcomings: the occasional over-repeated choruses; the way the songs escape from you as you listen to them. But it’s far from a “nothing” album. It is very generously “something,” both remarkably absent and refreshingly ingenuous. Despite Wallace’s misleading lyrics in “Unbearable Thinking”—“You can’t disguise something as if it were nothing”—Cathedral has managed exactly that.