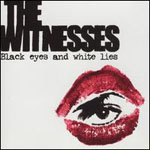 By now the flood of bluesy garage bands has subsided into a generic tide washing in and out of recent music consciousness. With bands like The White Stripes and Black Rebel Motorcycle Club divesting themselves of guitar pyrotechnics in favor of more sober, toned down blues forays, with The Black Keys on hiatus, and with tripe like Jet thankfully fading away, trend timing would suit a new set of bluesy rawk apostles. Looking at the back of Black Eyes and White Lies’ case – scowls, smirks, wild hair, tight pants, and Bonnie Bloomgarden’s Budweiser dress – the Witnesses look pretty fucking prepared to fill the vacated spotlight. There’s a swagger and a half in every one of them. (And they’re from New York, but don’t hate.)

But if the Witnesses can capitalize on the situation and stand out amidst the recent paucity of blues-rock offerings, they’ll owe their success as much to their aggressive talent as to style and timing. The band dilutes the unhinged excess of The Stooges into fuel for a more efficient engine, but make no mistake – it’s an engine that still kicks and roars. And no, they certainly haven’t even chosen an original vehicle for their swaggering energy – many artists of equal or better quality have warmed this driver’s seat – but they re-tune the thing with unarguable skill and energy.

The machinery behind Black Eyes and White Lies is impeccably synchronized, finely honed, and surprisingly forceful. Guitarists Oakley Munson and Darian Zahedi match sputtering riffs with chalky chord bursts and are unafraid to send tracks into sick overdrive via The Righteous Solo. Occasionally, as on the relentless “Summer of Blood,” Munson and Zahedi will fuzz out the figures, but primarily they keep to no-nonsense six-string dynamics and power. It’s more than good enough – not only are these riffs tailor-made to rip right into a rock lover’s sweet spot, they require a fair deal of fancy fretwork.

Of course, you can’t have swagger without rhythm, and the Witnesses also bring their fair share along for the ride. If Kenan Gunduz’s bass leads aren’t individually ambitious, they accomplish the more important task of buttressing Will Scott’s appropriately clean drumming to keep hips shaking out of their sockets. And when given time to shine – and on “Better Half” they positively sparkle – the complementing bass and drum patterns threaten to shake not just the tight-waisted hip, but bring the whole barn down. “Better Half”’s bridge smartly shows off just how much Gunduz and Scott are up to behind their comrade’s dazzling guitar show.

Still, Munson and Zahedi can’t help but attract the spotlight with the kinds of great hooks they throw down on “Rocks,” and the rugged shredding that dominates the opening of brilliant “Be Straight with Me.” Not only do the two churn and roll, but keep the integrity of the band’s flawless synchronization intact by working rhythmic patterns into the already powerful partnership of Gunduz and Scott (see their work on “Don’t Kiss and Tell”). They play like they’re heroes, and wouldn’tchaknowit, the sex-alcohol-and-cigarettes duration of Black Eyes and White Lies only backs it up.

The flaws with the album are pretty much generic (that is, tied to the genre) ones – a lack of any profound lyrics and fairly typical rock structures. The male vocalist – it varies from song to song – most often trades the usual back-and-forth “you treat me bad” matter with Bloomgarden (but on key, nicely enough), and largely the impact of the group’s words are rendered superfluous by the excellent songs behind them. But one wouldn’t be wrong to argue that if you’re turning to this kind of musical sass, it comes with the territory, even that it’s kind of nice. When other bands with this much skill are pondering philosophy and quirk and politics, the contrasting banality of these lyrics can be as much a comfort as a cop-out. They’re about love and breaking up and cheating and all the vice-ridden pleasures in the blues vocabulary, yeah, but since when have those topics become passé? Or, if that’s not a sufficient justification, then it’s worth pointing out that the Black Keys have never written lyrical matter more insightful than this stuff, anyway, and they’re still a pretty damn fine band.

Whatever way you look at it, the primary issue at stake – when the denim-clad ass-print of so many artists is so deeply embedded in the seat of the blues-rock genre – is how well the pre-existing format gets filled out by its newest cavaliers. Black Eyes and White Lies answers the question with lip-licking assurance – deliciously well. Deliciously well, indeed, and why don’t you get into the passenger seat? Take them up on the offer – not only are The Witnesses good handlers of your blues, they’ll probably console you by getting into your pants after seducing you with this much licentious skill. Jack and Meg only tease you after all, anyway.