Other Records by Wolfmother 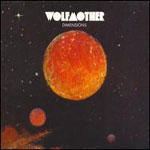 About four years ago I caught the Burning Brides opening for Queens of the Stone Age (still with Nick, thankfully) in Toronto -- their set a short but impressive mix of '70s garage metal and Nirvana's Bleach, performed with lots of energy and heavy, repetitive riffs. The whole thing was straight out of three or four albums I love dearly, and they did it well -- which makes it kind of hard to explain why, despite still being one of the best opening bands I've ever seen, they're also responsible for two of the most disappointing records I own: Fall of the Plastic Empire and the "I can't believe I fell for this again, I deserved to lose that fifteen bucks" sophomore effort, Leave No Ashes.

If you ask me what the hell could be so different, how a band could lose so much in the process of recording an album, I honestly wouldn't know where to start. The band played with so much energy and conviction that it wasn't hard to look past how empty the songs were at the time. Once the novelty of hearing a band pull off a Bleach song that well wears off, though, things begin to fall apart. You don't have to worry about that element live, of course, so it's easy to be fooled -- but when you actually get the record and hear the songs again, now blandly produced and lacking any dynamic, you realize that, in losing that immediacy, both records lack everything that made the live show so great.

I spend two paragraphs of a Wolfmother review revisiting my years-old beef with the Burning Brides because the fundamental problem with an album like Leave No Ashes and an EP like Dimensions is the same. It's not that both are rock trios that sound a hell of a lot like the same bands; thousands of bands have these influences. It's just that there's a line to be drawn between using a style -- like, say, Rage Against the Machine basing an entire discography on classic Zeppelin F# riffs -- and relying on one. Wolfmother fall on the same side of that line as the Brides, or Jet if you want an easy target: groups that just seem unable to move past mimicking a style or era. Rage, unlike those bands, went beyond just the Jimmy Page riffs; Morello developed his own sound early on, and de la Rocha not only had something to say, he didn't sound exactly like Robert Plant or Ozzy fucking Osbourne saying it.

There's no point in avoiding how much Wolfmother (and "Dimension" in particular) sound like Sabbath on almost every level -- right down to the guitar tone, the Geezer bass lines and unmistakable vocal mannerisms. Even as early as thirty seconds into the EP you hear Andrew Stockdale belting out one of his many "OHHH YEAHHH's" in the exact tone and timbre as a younger Ozzy. It's a little too uncanny, not to mention unneccesary and frustrating considering it's actually a pretty good song outside of the gimmicky feel the Ozzy-ness helps create. Like the rest of the EP, playing into genre clichés -- that hilarious "implosion" at the beginning of pointless psych-jam "The Earth's Rotation Around the Sun" is a perfect example -- just ends up constricting their music and juxtaposes them next to bands they can't possibly compete with.

The Floyd-meets-"Dream On"-meets-Rush prog ballad "Mind's Eye" is about as good/frustrating as "Dimension." Stockdale's still throwing in the Ozzy "OHHH YEAHHH's," but this time the band replaces decent Zeppelin riffs with prog lyrics ("Come and see the mind's eye / We can find it if we try!") and, since this band goes to extremes to accomodate what you'd expect from every genre they touch, an epic keyboard solo. It actually kind of sounds like a better Mars Volta, but again sinks itself with formula, never really attempting to develop a personality. You can see the same issue again with "Love Train," which nabs the bongo intro from "Sympathy for the Devil" before reverting back to prodding Zep riffs and terrible sexual metaphors. I mean, come on guys, if you're going this far to copy a band that wrote such subtle romantic odes as "Whole Lotta Love," you can do better than a giant, charging phallic symbol that you want the girl to "get back on." Work with us.

The bottom line here is that unless Wolfmother move beyond this gimmick and distance themselves from all of these easily recognizable bands, they're just going to continue limiting both their music and their audience. I'd love to think that they're much more interesting than this EP lets on, and too smart to keep wasting their time as a glorified cover band -- but that's what Dimensions boils down to, and, unfortunately, it doesn't give us a lot of reason to think the full length will be much different.