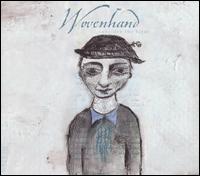 David Eugene Edwards may be the most archetypal gothic-Americana, fire-and-brimstone unorthodox music preacher that our corn fields and cotton plantations and moonshine could have inspired in this sterilized day and age. End useless introductory description.

16 Horsepower, the gothic-Americana, fire-and-brimstone alternative band that Edwards fronts, has had a long history of making apocalyptic neo-Appalachian rock albums that are quite good but fall just shy of being something that one would write home to mother about. Edwards’ rather solo side-project Woven Hand debuted with a self-titled 2003 album that stripped the 16 Horsepower sound down and filled in the space with louder echoes of Edwards’ rustic man drawling and yodeling and new millennium synthetics. Along with the unique, shimmering dark folk sound that resulted, Woven Hand featured some of the best songs and most memorable melodies that Edwards had penned to date; not only did my mother like it, it’s on her Christmas list. Blush, a choreography soundtrack that came out around the same time as the self-titled, would surely inspire listeners to go see the choreography just to see how the hell that’s supposed to work out.

The development revealed by the newest Woven Hand release, Consider the Birds, is an interesting, if not altogether delightful, one. The arrangements are still impressive in their composition and use of space, but they now seem a bit fuller with a more live sound, sacrificing the weird intimacy and bottled lightning bug ambience of the self-titled for something that falls closer to the more traditional hoe-down dirges of 16 Horsepower. And the effort to meat up the accompaniment seems to have distracted from, yes, the songwriting. In structure and vocal melodies, the songs are simply not as distinct or hook-laden as the more minimal craft of Woven Hand.

“Chest of Drawers” stands out on Consider the Birds precisely because its flowing guitar line remains fairly bare, giving Edwards space and time to meter out his vocal performance with the sort of nuanced emotional inflection that gets buried under the business of many of the surrounding tracks. Invoking Cash and the still living Cohen, Edwards plucks his strings serenely as his dirty boot taps out time on a worn Bible. With every sound wrapped in a resonance that sounds recorded from a cathedral of a barn, Edwards remains the serpent-wielding, assaulting psalmist despite his softer tone: “The world will bow / And knees will be broken for those who don’t know how / He delights not in the strength of horses / He takes no pleasure in the cleverness of men.” It’s to the credit of the atmosphere that vapors off Edwards’ sweaty brow that such a lyric could still compel the listener to breathe a heady “Amen.”

In addition to its musky air of authenticity, Consider the Birds spreads its sublime ideas throughout its ten tracks of moderate length, be it the sharp acoustic riff that opens “Sparrow Falls” or the simple key line carefully interwoven into the fabric of “Bleary Eyed Duty” or the electronically maligned drums that end “Off the Cuff.” Even so, the rambling looseness of the music enervates, and Edwards too often fails to find the intonations that will drive home his stakes and his lines. After the peak of “Chest of Drawers,” “Oil on Panel” throws together a flimsy freak of percussion, shrill tones and piano, beach sounds, and humming. By the time the drums kick in, any effort to care has been lethargically squashed. While the album quickly atones with its final four tracks, a rather inhibited range of mood and tempo wears away at the attention. Consider the Birds would have greatly benefited from the kind of variety provided by “Glass Eye” and the cover of Bill Withers’ “Ain’t No Sunshine” on the self-titled.

With his mastery of the genre niche he inhabits and his whiskey-scented apocrypha, David Eugene Edwards long ago stated his claims and claimed his states, and his small cult following is not undeserved. The slight step back of Consider the Birds will hopefully become a precursor to two steps forward into new territories.