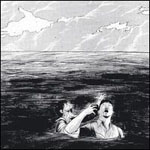 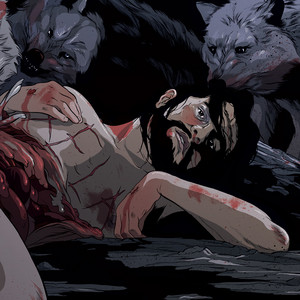 Like Magic Eye or smoking, religion’s never really done much for me. The closest I ever got to a holy experience was via the Lord’s Prayer at school, repeated once a week till it was just another times table rhyme from the mouths of bent-backed children. This, perhaps, is only my reluctance to believe in something so un-fantastic, so plodded-over and traditional. But what if there is something out there in the dark; some omnipresent spectre peering down from its lair? What if instead of a welcoming white beard it’s poised with a long cloak and assegai, waiting with a blank canvas and an absence of red paint? What if he/she’s also got a blackboard, and every motel-drawer bible you vandalized with stickmen equals six nights of marrow-chilling horror?

That’s the theory propagated by Type mogul John Twells, whose fourth album as the amorphous Xela is one of the bleakest recordings I could ever imagine a non-incarcerated human creating. And I don’t mean bleak as in transferable to black hoodies that jump up to form right hand into horn sign—I mean apocalyptic, bone-aching white noise, the kind of thing the SAS play when they’re trying to weed out the crackers. Having already skirted the shores of doom on his horror-soundtrack album The Dead Sea (2006), Twells comes ready trained in the art of enduring trauma, but on In Bocca Al Lupo we find him casting his rations and powder to the waves as he waits for the inevitable ferryman. Conceived, excommunicated, and chastised by Twells during two years of exploring ruined cathedrals, In Bocca Al Lupo (Italian for “into the mouth of the wolf” or “good luck”) uses hearse-black graphite grease to paint the definitive account of the side effects of too much faith.

Split into quarters of Halloween tempazepam and running at more than an hour, In Bocca is by no means small beer in anyone’s eyes. Whether you hear the manipulated field recordings of bombed monuments of just four slabs of sublimating matter depends somewhat on your Rorschach reading, but I’ll waste no time in telling you these are the coldest drones I’ve stuck my head in since Godspeed You! Black Emperor’s F#A#∞ (1998). What little traces of detectible music remain are just proof that a part of us will always covet mayhem and won’t go to sleep until evil has swatted a victim: see the thematic sinew on opener “Ut Nos Vivicaret,” prowling delicately through moonlit ruins as machines grind like bad traffic. It’s occult as fuck, and harks back to an era where nailing heretics to crosses was the staple of holy entertainment. “If they’d hanged Jesus Christ we’d all be kneeling in front of a fucking gibbet,” prompted Richard E. Grant in How To Get Ahead In Advertising, railing against the fallibility of consumers. Well Dick, if they’d faxed him through two charcoal rollers and punched a spoke-hole through the resulting dark disc, I think you’d have the album we’re listening to here. As gruesome as anything you’d expect from a record whose cover art depicts wolves lapping at slashed tract, there’s a relentless dissolve into “In Deo Salutari Meo,” where you can eavesdrop on pieces of mass behind the ominous ambient crackle. A voice rasps in the dark, prompting you to crawl on with caution as cracks start appearing in your brain. It all tastes like an inescapable art installation—unsurprising, as that was the record’s original purpose—but if you bought tickets for this show you’d be unwise to take your eyes for a second off the fire exit.

Clearly keen to have his name in the hat for the next David Fincher OST, Twells makes no attempt to purify his evangelical vacuum on IBAL‘s deeper b-side. Instead he recreates the hooting of steamers as they drift helplessly toward the maelstrom. Not since Malcolm Clarke’s score for The Sea Devils have I felt the bubbling of Stockholm Syndrome for such angular, jarring music, and “In Misericordia” could well be the sound of post-coital bliss between the idol and its servant, bathed in celestial crying as one belief swallows another. We’re definitely closing in on the core apparatus now, and that smog from the pit just keeps on wafting up as Twells gently dares us to turn back. It’s too late, though, and scorched reactions try and drown out a sacrificial pounding on “Beatae Immortalitatis.” Something hideous is beginning to awaken, chewing up tapes of demonic screeching like the climax to some diabolical blazing. It’s enough to convince the listener he or she is one of the shepherds who saw stars one December and thought that their saviour was returning: this is visceral, terrifying, transformative music, scarred forever by the dormant spores of cold campfire psychosis. Eventually the furies subside into a piercing electrical hum, then the currents die, then nothing. Just a glare from some hovering deity as the phantasms melt into shadows, the howling still ringing in your ears as free will peels back into worship.