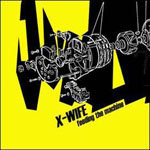 The process of sifting through endless amounts of music in the bated hopes of an unearthed jewel is like combing over an endless beach with a rusty, weak metal detector to find a silver mine: it takes a great many hours and a large store of patience. So, when that rare time comes when one band materializes out of their local music scene with a half-way new sound, the inevitable hype machine begins.

As more writers muddy the overcrowded waters, the pressure to deliver snowballs to enormous heights until said band is unleashed upon the world with the greatest of expectations heaped upon their frail and oft inebriated shoulders. Sometimes they succeed, even in the face of these near-impossible odds, and become the standard bearers of their particular sound, at least for a time (example: the Strokes). And, with gushing, universal accolades comes the delayed but always anticipated backlash, the inherent revulsion felt when one’s pet band becomes everyone’s new toy (example: the Strokes).

This brings me to another band with a fairly similar fate: the Rapture. With only a dozen or so songs to their credit, the Brooklyn based quartet was already being trumpeted as the leaders of the new breed of punk acts, combining the genre’s anarchic ethos with, well, a dance beat, thus its apt title of dance-punk (or post-punk). Then came Echoes, which did little to suppress any critical ardor. And after further honors, including their number one spot on Pitchfork’s 2003 list, the repercussions began; many began to rescind their previous adulation, others simply shrugged off the Rapture as overrated.

Regardless of where you stand on this issue of critical build-up and what it can do to a great (or sometimes not-so-great) band, one thing is for certain: the imitators. We’ve seen the many bands that have attempted an inauthentic rehash of the Stroke’s meticulously chaotic Is This It? (Jet, Kings of Leon). And now the post-punk progenitors the Rapture can begin to claim spawns of their own with X-Wife’s decent but ultimately forgettable debut album, Feeding the Machine.

I’m gullible enough that if someone told me that Feeding the Machine was a grouping of demos from an earlier incarnation of the Rapture, I would have been fooled. Lead singer Joao Vieria sounds nearly identical to the Rapture’s Luke Jenner. While Vieria has virtually the same vibrating tenor as Jenner (with an occasional nod to Television’s Tom Verlaine), it lacks the latter’s affectations and intensity. Jenner dots his songs with manic yelps and squeals, pushing his quavering voice nearly beyond its physical range, and making each song a uniquely passionate experience. Vieria never ventures outside of his safe zone, content to try little else but a nostalgic howl.

Feeding the Machine is the sound of the Rapture had Gang of Four never existed; in fact, one of, if not the primary influence of X-Wife’s fast paced guitar riffs is the aforementioned Strokes, hardly the apropos prototype for any newly founded band hoping to forge a name based on ingenuity. It’s also vaguely danceable thanks to the omnipresent ’80s-throwback synthesizer, which has the dubious honor of rendering nearly every track interchangeable. “New Old City” is certainly a catchy tune based around a solid riff, but not much different from “Fall,” “Second Best,” or “Outside” to name just a few. The tracks are catchy, to a point, but without real substance or staying power.

I’m sure there are people out there who would enjoy Feeding the Machine beyond a cursory listen. It scarcely presents the challenge that an album like Echoes demands of even the casual listener, which is what I always took to be one of the great joys of music. Then again, given a world of options, people still eat Hershey’s, drink Bud Light, and see National Treasure, so there’s something to be said of comfort.