1. Raccoon Song
2. Queens
3. Oak of Guernica
4. Reverse Crystal // Murder of a Spider
5. Hoshi Neko
6. A Star Over Pureland
7. Crystal Fortress Over the Sea of Trees 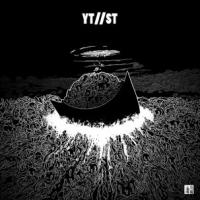 YT // ST opens with an invocation that doubles the cycle of nature, suspending the album between earth and sky. We hear a thunderstorm and heavy rain, and a voice crying into the storm, as yet undistinguished from the tumult of nature. As the rain is drawn from the reservoirs of the earth and returns anew, Ruby Kato Attwood’s cries seem to elicit music from the elements themselves: her voice blends with the rain and from the ground beneath her arises, as if organically, a primal organ hum that leads into “Queens.” And it’s appropriate that this record should seem to grow at once from the natural and the human, canceling the difference we draw between the two: its primary concern, which Atwood and co-founder/drummer extraordinaire Alaska B (both practicing Buddhists) specify to be the “struggle for enlightenment,” is a struggle precisely insofar as it is a matter of breaking down artificial boundaries, overcoming opposition, and finding one’s union with the Whole. Thus YT // ST is a record of violence and of harmony alike, both musical and otherwise. A record that explores the shifting terrain between “A Star Over Pureland” and the scorched earth of a lightning strike. A lightning strike of a record.

It’s also a performative act of musical decolonization. This isn’t just my interpretation: the group’s Bandcamp page makes their intentions pretty clear, describing them as a “multidisciplinary hyper-orientalist cesspool” which, “[b]y simultaneously inhabiting a variety of cultural forms… shatters the comfort with which colonialist cultures have appropriated the image and art of Asians and First Nations peoples.” Thus they call themselves “Noh-wave” and “Iroquois Core,” and their music touches on reference points as diverse as Chinese opera, black metal, and the kind of cosmic psych-rock the Boredoms have been melting our brains with for the past two decades. Although it’s a formidable and magnificently realized project in itself—if only Edward Said had been this much fun to read!—this politicized transcendence of genre can, I think, ultimately be seen as part of the same struggle for enlightenment that presents a kind overriding telos for everything this band does, from their music to their already-legendary live show.

Usually when bands adopt such sweeping and ambitious political or spiritual aims, they are, at best, indirectly realized in the music itself. What makes Yamantaka // Sonic Titan so compelling is the way they selectively harness the most intense or extreme affects particular to each of their primary genre touchstones in the service of a singular and coherent sound. Take, for example, their use of black metal and opera tropes: these styles are as superficially different from one another as could be, and yet both are concerned with creating the same kind of grand, larger-than-life, hyper-expressive productions. Yamantaka // Sonic Titan take a bit of the sound and a whole lot of the fury from each genre, creating something that might not be embraced by metal or opera purists, but should be by everyone else.

For example, “A Star Over Pureland” will probably be my favorite metal track of the year, but I’m not even sure it qualifies as metal: I think it might be more extreme than that. And “Reverse Crystal // Murder Of A Spider” is one of the most epic, operatic songs I’ve heard in a good while (and features what is definitely the most bad-ass organ solo I’ve heard lately), but no one is going to confuse it with musical theater. Which, again, speaks to these ladies’ talent for harnessing the considerable power and affect of these genres even as their literal adaptation of established sounds is always impure, always modified or altered as the band sees fit.

The violence of transcendence, though, is only half of the struggle: maintaining the whole harmony-and-cohesion thing isn’t any easier. Fortunately, as Attwood and Alaska B know, that’s why we have pop music. And boy, is there ever some lovely pop on this album. How much more blissfully entrancing than “Hoshi Neko” can a piece of music be? I don’t know what Attwood is saying here (or anywhere on this album, even though I think she’s actually speaking English sometimes), but it doesn’t matter; her voice both pierces and destroys me in the most delightful of ways. Like many songs on the album, “Hoshi Neko” achieves its effect largely through repetition; the pair have spoken in interviews about repetition in music being a mirror of the chanted mantras central to Tantric Buddhism, and this song is a pretty damn convincing argument for them being onto something there.

It’s hard to overstate how refreshing it is to discover a band that adopts such profound aims for their music and, incredibly, actually goes some distance towards pulling them off. Just a few short centuries ago, both Western and Eastern music were intimately connected to the spiritual domain, and it’s a matter of historical fact that the most enduring artistic works of any great civilization are usually linked to religious ceremonies, rituals, and celebrations. Maybe, in that context, it might not be crazy to see Yamantaka // Sonic Titan as the block-rocking shamanesses of a latent globalized spiritualism, isolating and seizing on the possibilities for transcendence in an overwhelmingly media-saturated world and exploring those possibilities in music that is, truly, not just in but of this world.