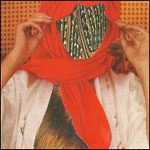 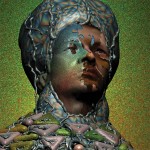 For those unfamiliar, Yeasayer are a Brooklyn-based quartet who enjoyed some buzz and much critical acclaim around the release of their 2007 debut All Hour Cymbals. That record was mostly shitty and had absolutely no sense of scope or direction, but, to be fair, there were some very melodic and occasionally addictive tunes. The most obvious of these was “2080,” a sort of hippie jam about perspective, which is what all hippie jams are about (wherein perspective means “being positive”; see also: their stupid band name). In 2007, Yeasayer wanted us to “get it.” What that “it” was, like the liquid sense of cool that has swirled about Broken Social Scene, or that Dylanesque quasi-relevance once attributed to Conor Oberst, is a nebulous referent and yet all-important to getting these artist’s appeal. One senses or wants to believe that “it” is key to something more than just the band, that having faith in that “it” is more than simply the heart-warming entropy of a self-truncating simplicity. And so it is with great anticipation that one of 2010’s first Big Indie Releases is upon us, hoping with newfound earnestness to expand on its world-wise perspective, to swipe away from the veiled eyes of its audience and to…holy shit, look at that awful cover!

It is with blatancy and humility before the excremental wave of this band’s approach to songwriting that I insist that all evidence points to Yeasayer being complete boneheads. Odd Blood‘s lyrics, like Cymbals, are insipidly patronizing, resorting as they so often do to reductive platitudes in the form of “advice songs.” Worse, this desperate paternalism is exploded sonically to nth realms of crass pretension, cramming every last space with splurges of computer-generated excess that mostly belie a lack of vision or forethought; the band are, in the parlance of staidly academic critics, wanking. How else does one explain the sincere and meaningful and endlessly listenable breakup dance number “ONE” alongside the unremitting bullshit of boneheaded opening track “The Children”? Or even that one tiny bar of steel drum or whatever between “ONE”’s first chorus and second verse? Or the entirely superfluous weird alien voice breakdown thing in “Ambling Alp”? Or how every halfway decent track here has some kind of falsetto soul delivery filtered somewhere into its last third? One supposes that Yeasayer may be speaking in Corganese, a not-rare-enough dialect that is multivalent and distinct and occasionally capable of flourishes of great beauty but possesses no words for “quality control.”

Theirs turns out to be a bit of a high-wire act that relies too often on the net. See their video for “Ambling Alp” below, which is either ambitious or pretentious dreck, depending on the degree to which you believe that their songs possess anything of passing thematic complexity. Men with mirrored faces box one another and naked women stand in semi-circles around paint-covered men and horses run in slow motion. It all might be the patchwork narrative of true visionaries, but I doubt it. How can it be? The first eight seconds of the song are dynamically awesome and rhythmically vibrant, but the rest insists on continuously telling you to “stick up for yourself, son” and something about rain clouds as a metaphor for bad times. Yeasayer are a band with a well attuned if hypertrophied sense of style, and perhaps that’s about it. They sound very busy in their stretching to recapture what that “it” they want us to “get” is in the context of this, what is undeniably their Statement Album.

The most damning evidence is that directionless opening track. Robot-voiced and unintentionally cantankerous, “The Children” is so obvious a misstep into awkward reaching, so clearly a sophomore boondoggle, that one wonders how it got through all four members and their label. It sounds like a very thin idea processed through about a trillion gee-whiz ProTools plug-ins, at once the intended zenith and unintended nadir of the album, and an example of its central problem: Yeasayer want desperately to say something lasting and important but have no idea what they want that thing to be. Instead, they settle for sounding as if they’re saying something lasting and important.

Elsewhere there’s a sort of odd techno number “Love Me Girl,” which is vaguely futuristic and computer-y in the same way that the album cover is, which is to say in the same way that expositions in the 1950s showed us how we would live in the 2000s, and it heaps on the superficially fantastical, ignoring that true progression comes in the form of seamless integration. “I Remember,” with its “You’re stuck in my mind / All the time,” sounds cloying and empty. I tried to care about “Rome”’s quasi revenge narrative, but it dissolved into repetition before I got there. Yeasayer treat accompaniment the way one adds lead paint to a wall, by simply slapping it on layer over layer; I’m reminded of the bric-a-brac robots from Beck videos, all boxy and huge and walking awkwardly about. The same mentality is presented here without irony, used as a vehicle for something Meaningful, and it can’t help but come across as unintentionally absurd. Even arguments that they may have been attempting to make a period album confounds even the patient listener as they try to place the many unpinned references. And besides: bad lyrics are timeless.

An overcooked vanity piece from a band inflated by praise, Odd Blood heads in every direction at once. Its most direct moments—the chorus to “ONE,” the rhythm-section of “Ambling Alp,” the occasionally approachable pretence of a subject—hint at the beginnings of a listenable record, but it’s still miles away from the kind of mutual respect required for a great and lasting record to occur between artist and audience. Yeasayer are sincere and want to make something that their audience will find meaningful; they should spend less time acting like it and trust us.