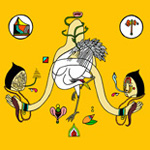 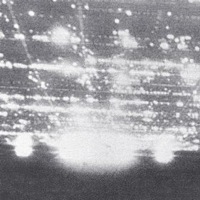 Going Places indeed. If we can look beyond the album title’s coy rejection of the sentimental send-off (which is right up there with the final Kids in the Hall episode, where the kids dance on their own grave), there is an ominousness here. Full to the brim with Paul Gauguin’s famous tripartite, “Where do we come from? What are we? Where are we going?”, the track titles suggest at best a cautious optimism. They “Opt Out” but of what? Why does “New Life” remind me of a vacant lot?

If Going Places is going anywhere, then it lumbers, uncertain of direction, squinty-eyed at the horizon. Not quite the desolation of The Road, more like the boredom of being completely free, but with some vague premonition of impending disaster. It serves as a fitting soundtrack to Toronto’s recent sweltering heat wave (itself undoubtedly a sign of some future disaster): I’ve been lying on my bed and staring up at the ceiling fan, waiting for it to elicit some immediate and visceral response, but the Swans don’t seem to play that way anymore. What it does do is something arguably just as powerful: it carves out a negative space for your emotions, a non-judgmental partner to cozy up with and be the little spoon for your loneliness.

More than just a pinnacle of the band’s career, Going Places also fits snuggly into the arc of the Type label. Like Xela’s The Dead Sea (2006), it evokes horror and yet, coming from a noise rather than ambient background, it is unrelentingly sludgy and viscous. “Opt Out” starts soft, but it gradually digs its way deeper into the ground like spinning wheels; a thirteen minute encomium to frayed nerves. This is what Fuck Buttons have tried to do—to be punishing and beautiful in such equal degrees that you begin to think the two qualities are symbiotic—but screaming over M83-synthesizers is about as close to this tension as scribbling over a Gauguin is to Picasso.

Beauty and ugliness are rarely distinguished but when they are the band manages a rare balancing act between ambient and noise where neither aesthetic seems sacrificed. “Limited Space” takes that split-channel ping so familiar from Wolfgang Voigt’s Gas project, but then takes the equally familiar quarter-note bass kick and muddies it in distortion. The tribute is blatant, and yet it completely inverts Voigt’s sylvan imagery—being more bulldozer than forest—suggesting claustrophobia where Gas evoked zen-like space. And fine, I partially lied when I said Yellow Swans skirt apocalyptic associations: near the end of the track, roaring crowds begin to emerge out of the mire, shocking in their anonymity, like spectators at the Roman Colosseum. They are tempered only by the haziness with which they appear and quickly disappear, as if seen through grainy black and white photographs, a reminder of the ways in which past violence becomes a reverie in the present. And then, staggeringly, that ping is entirely audible throughout, a play with the extreme poles of scale that, needless to say, gives the track a conceptual weight rarely seen in such bracing music.

The best noise music doesn’t struggle for emotional expression: Prurient is naked vulnerability; Merzbow is chaos and disruption; more restrained artists like Tim Hecker are internal and external landscapes. Going Places does all of this at one time or another, but also something else that I can barely put my finger on, but which can best be described as a way of standing at a remove from the music. Not that it seems distant but that, as other writers have mentioned, it evokes a kind of “cinematic noise,” wherein the destruction is witnessed through something even resembling clarity. If most noise music is like the damaged emulsion of avant-garde film “painters,” then Yellow Swans provide a carefully focused panoramic of a world that has ceased to be recognizable, a document of chaos and abstraction. The layers of scraping, metallic noise during the climax of “Opt Out” are dangerously close, but then we get “Sovereign,” the best approximation of the stillness and melancholy of ruins I’ve ever heard. The band surveys this scene with damaged eyes, yes, but this only makes it sharper, in the way that survivors relive their trauma from outside their own body.

Pete Swanson and Gabriel Mindel Salomon apparently already knew Going Places would be their final record even before they recorded it, but did they know they would achieve something that would be nearly impossible to top? Perhaps it’s the lack of anything to prove going into the making of a final record: at this point they’re probably not trying to introduce new elements, merely saying goodbye to each other in a language they have continually developed over the last decade together. It’s fair to read Going Places a requiem, but when the title track climaxes into a collision of elements (like every sound they’ve used on every album playing at once) there’s no anger, only acceptance. The truth is, they’re not going anywhere, they’ve already arrived.