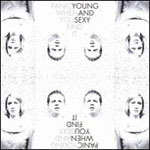 Panic When You Find It

It’s almost impossible, being a product of an increasingly cynical culture, to approach a band named Young and Sexy without a sizeable amount of apprehension. If you were me, your first thoughts upon encountering Panic When You Find It would be “oh great, another ironic record” and this would, initially, get in the way of your enjoyment of your first Young and Sexy experience. Like, come on—an album of slow, sad pop songs about bruised and broken hearts released on Valentine’s Day; the black and white cover photo of the hapless non-couple (okay, if you must know, Paul Pittman and Lucy Brain were a couple at one point, and this, for whatever reason, remains a juicy enough detail — “former lovers”—to still sex up their bio); the precious, nasal harmonies of the boy/girl vocal duo—_really_? Could things really be all they seemed? Haven’t I heard this before?

If you were to react in such a manner, though, it would likely be a good idea to take a step back and listen to Panic a few more times, in a few different places—on your headphones out for a walk, for instance (okay, it’s more of an evening stroll than a morning jog), in your car on your way to work (more cloudy with a chance of rain than nothing but blues skies), at home in the evening with a glass of wine (or perhaps you should stick to Kool-Aid). This is all to say that Panic When You Find It is a mood album. And I’ve come to realize that when that particular mood strikes, this isn’t a bad thing at all.

Panic is the follow-up to 2003’s Life Through One Speaker, which received an enviable amount of praise and found its way onto a few publications’ year end lists (most notably, The Globe and Mail’s). Being from the same city, on the same label and having recorded at the same studio (JC/DC) with the same producers (John Collins and Dave Carswell), it’s inevitable that at moments Young and Sexy sound a lot like The New Pornographers and its sideprojects. Both Newman and Bejar have influenced Pittman’s singing style, and their flair for the theatrically poetic has been channelled through his pen: “soon your muse was through with you / the operetta you wrote finished you.” Young and Sexy, with their lush, orchestral arrangements and boy/girl harmony approach, make it hard to avoid comparisons with other indie/chamber pop bands—early Belle and Sebastian and Stars to name a few.

Obligatory comparisons aside, Panic When You Find It is an organic, tightly-produced grower of an album. Perhaps unlike a Stars record, which gratifies immediately but can leave you with a sugar hangover, Panic is much deeper than it first announces. The more you listen to it, the gentler the voices sound and the more sincere the singer-songwriters’ mewling. New layers are revealed with each listen, like the haunting, rhythmically-compelling piano part on “Trespass on a Thought,” and this is where the band shows its innovation. For me, Panic’s stand-out moments are when Pittman and Brain stray from the formula and show a bit more vulnerability. Pittman sounds like he means it most when he loosens up on the final chorus of “Turn on your Weakness”, and similarly, Brain achieves a surprising intensity on the awkward torch beauty “Without Your Love.” Also, it’s good to hear the band put on their fun hats on the less earnest, geekier “Satellite.” Yay! Life is not all darkness.

And that brings me to my main complaint with this album. Do artists producing this kind of pop—chamber pop, indie pop, pop featuring lush orchestral arrangements, whatever you want to call it—need to stick, relentlessly, to one theme? Yeah, love is a broad theme and there are many types of love songs to be written, but don’t the best love songs probe a bit more? Lyrics like “your lips are bruised with love,” even when sung in a song as melodic and beautiful as “Your Enemy’s Asleep,” intimate toward meaning something deeper, but fall short. On the other hand, though, shouldn’t a song be allowed to be pretty and not be asked to carry life-changing gravity? Yes, I believe it should. Herein lies my conundrum.

Whether you want it to or not, Panic When You Find It will woo you. You might as well give it a break and let it work its gentle magic. Like the relationship Pittman sings about on “The Curious Organ,” its alchemy works best when you most expect.