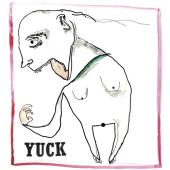 Yuck, the self-titled debut from the NME‘s latest hot young British band of choice, is not a particularly good record. A good record offers some point of view, whether narrative or abstract; it’s like a living, breathing being with which one can become acquainted, and like an old friend, remember fondly for its quirks. A good record isn’t a combination of elements so much as the uniquely affecting charm that comes from passionate commitment. And Yuck seem to have all the ingredients to a good record: tuneful songwriting, fuzzy rock guitars, an evocative ’90s sound; it’s easy on the ears, has a few especially welcome standouts. But Yuck is an uneven, largely shallow affair: bright and fun on the first listen, and pretty flimsy every time after. A band with a lot of potential, that’s what Yuck demonstrates, but one with a palpable lack of focus. One without that uniquely affecting charm. One without a good record.

It’s pretty trendy these days to be an early ’90s throwback, and Yuck covers that territory well enough, mostly sticking with Dinosaur Jr and early Foo Fighters-style rock (I know—early Foo Fighters? It’s in there, though), as well as wispier Elliott Smith ballads and Heavenly-inspired twee pop. I was really, really hoping that they would avoid the latter here—not because I hate Heavenly, but because every single damn indie rock record lately seems to be offering up the same taste of Sarah Records cocktail.

Yuck starts with one of its grittier rock tracks. It’s an optimistic beginning; “Get Away” and “The Wall” are miles better than anything else on Yuck. Singer Daniel Blumberg and guitarist Max Bloom are both at their best on “Get Away”’s soaring chorus—“Summer sun says get out more / I need you”—unleashing distorted vocals and even more distorted guitars. It may not be original, but it sure feels vital. “The Wall” provides a similar lift, even though the lame-brained lyrics try hard to bring it down.

Unfortunately, the only other song on the album that matches “Get Away”’s or “The Wall”’s energy is “Operation,” whose underwater gurgle comes on a little too late to offer much. Mostly the album ping-pongs around, mixing a few melodic strummers with disposable soul-searching indie ballads. “Suicide Policeman” and “Georgia” mine the aforementioned Elliott Smith and twee pop territory, respectively. Blumberg’s sister Ilana lends the requisite ethereal vocals to “Georgia.”

The most frustrating thing about Yuck, particularly on the cleaner tracks, is the lyrics. The band sticks to tired old clichés, and when they don’t their attempts at Stephen Malkmus-like nonsense just end up sounding silly, which is always why it’s a bad idea to try to imitate Malkmus. I know these guys are young, but I’d rather read a diary entry than hear a song like “Suck,” which lives up to its name by rhyming “benediction,” “addiction,” and “affliction”—one Stapp away from landing on Creed’s next album. “Sunday” is a more sugary example of the band’s general lyrical misfiring, what with its “I’ve got a choice now / I’ve got a voice now” refrain and cringe-inducing verses like “I used to choreograph / Airplanes in the sky.” Lyrics aren’t everything, but here they’re indicative of Yuck‘s overall feeling of emptiness. One struggles to be invested in something so willfully shallow.

Listening to Yuck is kind of like having a conversation with someone who agrees with everything you say. Pleasant at first, it eventually and quickly feels useless; why not cut your losses and look around for something better to do? Yuck is agreeable. And so is Yuck. They’re familiar and warm. But there’s no conflict in what they are or what they do. I find myself welcoming some awkward earnestness, some fuck-you arrogance, or some genuine idiocy. Instead, I find my indie rock sensibilities unoffended. And years down the road, if reintroduced to it, I’ll have to scratch my head and ask, “Have we met?”