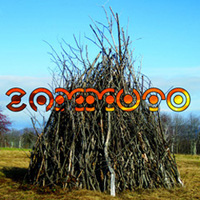 The gift of singularity is also a curse—so it’s important to remember that the Books, a truly singular band in an age of ruthless genre-partioning, have ended. There are no more chapters to be written in their story; there are so many “book” puns to be leafed through as we discuss our grief; and there is now Zammuto, which is not an epilogue or a footnote to the Books, but a new beginning for Nick Zammuto, one of that band’s members. Appropriately, it finds him flexing new muscles and honing new skills without abandoning the basic love for words that served as the joyful inspiration behind everything the Books put together. And it is, itself, a joyful record, prickly and playful and sometimes downright bizarre, but never less than welcoming. Perhaps most successfully, it stands entirely on its own.

Which isn’t to say that Zammuto and the Books don’t have a great deal in common—how could they not?—but to affirm that what differentiates Zammuto the band from its widely-beloved progenitor ultimately makes Zammuto the album so interesting in its own right. Again, the foundational delight in language remains intact—Zammuto will never abandon that interest, that is, in the layers of meaning that can be culled from a combination of semantically meaningful units, and how these layers are formed and reformed through placement and context. But whereas the Books’ cut-and-paste aesthetic necessarily lent a patchwork feel to much of their work, Nick Zammuto establishes himself as the focus of nearly every song here (the very Books-like “Crabbing,” which consists wholly of a sample of a hilariously misanthropic lost standard dug up from God-knows-where-or-when, being the principal exception), and it is his soft-spoken lyrics that therefore take center stage.

But Zammuto isn’t, as it turns out, a terribly verbose fellow: nowhere here does he have as much to say as he did on a track like “Smells Like Content” from Lost and Safe (2005). Instead he focuses each song on just a few repeated phrases, often favoring puns, such as the titular sentiments of “Groan Man, Don’t Cry” and “Idiom Wind,” or the knee-slapper about the “smell of your acetone” from the chorus of “F U C-3PO.” He isn’t, however, just going for cheap humor in most of these cases: through the patient construction of each of these songs’ tonal atmospheres and the subtle juxtaposition of accompanying lyrics, Zammuto allows the multiple meanings of his multilayered phrases to resonate in their own space. Thus, when he sings, “It’s all good / It’s alright / Crisis solved” through the mechanizing mesh of a vocoder in the verses of “Groan Man, Don’t Cry,” and then sets it all to a lovely, arpeggio’d chord progression that aches like an extended sigh, Zammuto deftly captures the resigned satire implied in the titular pun and makes of it something both compactly profound and sonically hypnotic.

Although he has a lovely voice, Zammuto almost never sings here except through a filter of some kind. It’s as if, having spent most of his career playing puppeteer with the voices of others, Zammuto can’t resist the urge to manipulate the words that even come out of his own songbook. Which he’s done before with the Books, but in the context of a solo-ish record, it makes for a patently schizophrenic listen. Sometimes, as in the gleeful opener “Yay” or the abstractly sinister “F U C-3PO,” his voice is so distorted and androidal one hasn’t a clue what he’s saying. Presumably one’s not supposed to care too much either. And anyway, aren’t those organs in “Yay” just the best thing ever? Maybe just saying “Yay” and playing some really cool music speaks to his emotional intent much better than a ballad or a love song. Such, anyway, is the impression this album dances so flagrantly around.

On “Idiom Wind,” Zammuto vocalizes a sentiment which is not only consonant with this impression, but sums up the tenor of the record quite concisely. With no vocal filter in place, he introduces the “Educated man / Doing everything he can / Which isn’t much / Because his education isn’t worth a damn.” It’s not an anti-intellectual statement, exactly, but more a recognition of the ultimate futility of involving oneself with words and texts that refer only to each other and not to the world we eat and love and groan within. Instead, Zammuto sagely advises, we should do stuff: “Try getting off your ass / Try picking up some trash.” After that, maybe, experiment with dancing. And maybe then get on with your miserable life.