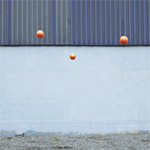 The blues, in the sense that “the blues” is about dismal melancholy and desperation, is the current that runs through these drone/free improvisation tracks. “Slow Blues” may make that most apparent, where violinist Jesse Zubot and bassist Joe Fonda trade off light pattern plucks with expansive bow scrapes while percussionist Jean Martin sends kick drum depth charges down between lovely brushwork. And then, suddenly, the song actually is a kind of blues, Zubot laying down a sighing solo over Fonda’s suddenly static bass line. I mean, it is blues and it isn’t; it doesn’t sound like twelve-bar, but instead “Slow Blues” sees the members of the band employing blues motifs to imply a connection with the blues through music that sounds more like post-punk.

That has a lot to do with the way Chon produces the mix, pushing the atmosphere and the decay off Zubot’s always-strangled bow approach and cymbal resonance while simultaneously enhancing the low end. It’s a glorious tone for a band that opens with a track that pirouettes between formal classical composition (and, seriously, that key change at 3:39 is fucking gorgeous for the all-of-10 seconds it lasts) and drone consistency, but “Low, Dark & Slow” is more than just a mission statement, especially since it doesn’t sound much like anything else on the album. “Circle” is a barrage of elliptic palindromes muddied up with Zubot’s lovely attention to spazzy detail and Fonda’s ability to play straight and free seemingly at the same time. Add Martin’s impressive drumming that manages to somehow anticipate and punctuate his colleague’s strings and I’m sold two songs in. “The Path” is slow and deliberate, a zombie rendition of some serious cool jazz, the breathing of the members echoing in the background, until it mutates into something skittish and undulating. Zubot plucks his violin strings into a melody that sounds like a snarky horror soundtrack.

“Wild Horse” is a spare track that draws on the air surrounding the instruments (and the spaces between their sounds) as much as the actual playing. It’s a perfect example of the ability of this band to coax wonderful passages out of concerted improvisation based on an understanding of modality; though the basic tone of these pieces remain consistent in each instance, Zubot and Fonda are on some key/melody/resolution science every time they turn a corner. And since the point of the band avoids the extremes of the soloing of be-bop and the free expression of improvisation it ends up somewhere in between: a band improvising together to create motifs, rather than a band improvising against or with each other to create solos that wow you with their voracity. By the time “Roll” morphs from obtuse free jazz into a weird country hymnal into a Middle Eastern space rock track.I mean, this is genius shit, right? This isn’t about combining genres; it’s about erasing the boundaries altogether. On the fly.

Because what’s more fascinating is how in tune this band sounds given that the members had only been playing together for four days prior to recording this album. Well…Martin and Zubot have played together in LaConnor before, but the addition of Fonda came about by chance. Circle the Path isn’t necessarily better because the band is so new, but it is more impressive for it. That speaks to the skill of the individual members as much as anything. ZMF Trio’s debut (let’s hope the literal name doesn’t mean this is a one-off) continues Drip Audio’s streak as one of the most exciting indie-art rock and jazz labels out there. This is dark, glorious free improvisation that recalls my faves—New Dalta Ahkri, Peter Brötzmann, Evan Parker, Derek Bailey—without simply repeating their moves. It’s eccentric without being obviously so (like John Zorn) and maybe that’s what I like most about it: you could smile and grimace when you listen to this but it isn’t telegraphing your responses. You’re therefore part of this improv too.