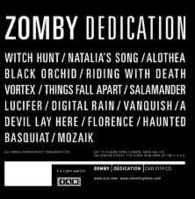 Soon will come a time when the historical canon of popular music replaces the traditional mythologies of the cultures we preserve in our own. And when this happens, inevitably, my vote will be for Zomby to replace Orion. I mean, let’s be honest: have you perused your local star charts recently? They don’t exactly bring any anthropomorphic fantasies to life without a lot of imagination. The Greek astronomer who mapped Cancer might as well have just left the downtown Athens Red Lobster on a particularly clear evening. I suppose that what I’m suggesting is more like bathroom graffiti than a considerate, metaphorical ordering of the predictable elements of a mechanical universe, but that seemingly disrespectful juxtaposition, the artful repurposing that is, for better or worse, so fitting in the modern times, will only be more fitting to the mythologies of the future.

And Zomby has always kind of reminded me of a mischievous, spraycan-wielding, black bandana-clad BMX troublemaker cruising my block for the perfect unwitting substrate that might best compliment his neon scribblings. In his own way, his career has made his music, one of thoughtful derivation and deconstruction, something once questionable in the hands of the conservative, stand up tall as a respectful creative form in tune with the dynamics of the modern era. He pauses with aerosol weapon at the ready in front of the constellations: Just draw some fucking sunglasses on there, man. Voilá. Zombus Major.

Zomby, relatively a figure of myth in his own time, identifies pretty readily with the image of the hunter. Maybe it’s the gunshots at 00:34, asserting that the man hasn’t stepped too far off of the club stage for Dedication, his second full-length, but it’s more likely I’m being influenced by the sense that both of the producer’s official, previous efforts have really felt like no-holds-barred conquests of marginalized styles—styles, maybe, assumed to have settled into orbits of passé inertia. Aptly namesaked, Zomby has always found his real talents in injecting new life into something that might have been considered dead and gone, better a part of the history books than a current DJ set. He’s consistently able to create new relationships between young and old, his works not so much the rediscoveries of dusty old tomes, but of thoughtful restorations and translations of classic source texts which serve to put time-worn themes into a modern context.

Every drop of unplumbed digital groove seemed to be reeling in the crosshairs after 2008’s fantastic, nigh-on-legendary Where Were U In ’92?, and all of sudden I didn’t find myself running to dig through crates of early ‘90s rave records—sweet Jesus did I listen to it a lot. A more immediate commentary, the 2009 One Foot Ahead of the Other EP found the producer taking a decidedly more modern approach, sort of simultaneously interpreting, perfecting, and blowing out of the water his own day-glo tessellation of layered yet succinct 8-bit dubstep, evoking the more tech-y and stripped-down chiptune-style digital flourishes of most of the tracks from his self-titled debut EP (2008) on Hyperdub. In retrospect, my favorite tracks from Zomby (particularly “Test Me For a Reason”) were the ones that were already stepping outside of the trappings of trend by embracing what might be considered the sort of sounds perpetuated by Zomby’s new home, 4AD, for almost 35 years. After only the first two tracks on Dedication—the delicate, lilting “Natalia’s Song” and the sinister, sentimental “Alothea”—we can be pretty certain we’re working with something that isn’t just a philosophical self-conquest for the hunter in question, but something that stands as a real triumph for the 4AD catalogue.

On further investigation, Dedication pings a lot of styles with a remarkably consistent level of quality: dub and not-quite dub (“Natalia’s Song,” “Alothea”), ghostly dancehall (“Vortex,” “Salamander”), damaged techno (“Riding With Death,” “Haunted”), ominous hip-hop (“Lucifer”), some funky 4/4 grooves that could be particularly moody house (“Witch Hunt,” “Digital Rain”), and even some really dark and distant, almost-ambient turns (“Vanquish,” “Florence”) which touch on regional contemporaries like Demdike Stare and the artists of Ghost Box Records. I love that Dedication is a lot spookier than a lot of things that try much harder to be that; it successfully encapsulates a lot without sacrificing respect to any particular, and at the same time without giving up the ghost to any fatal schizophrenia.

Though the feeling of real focus is defeated by how many tracks are so disappointingly short, even when the careful flow from each one to the next makes a reasonable excuse in putting the whole thing forth in the form of a skeletal DJ set, as he’s done before. I’d have loved to meditate a little longer on some of the hypnotic grooves here, but then again, I’m willing to find some pleasure in being politely asked to stick around for awhile. The single, “Natalia’s Song,” stands well on its own, but hardly illustrates the range of what Dedication has to offer. The peculiar tumble of “Digital Rain” may be the next closest thing.

That said, Dedication really feels like an assertion of self from an artist bound to lose anonymity. The producer seems to finally be settling into his own personality, emerging from a crucible of adventurous historical analysis to create this, an effort both disparate of direct influence and like a very well-informed statement on the momentary canon of dance music as a whole. Not to say that there aren’t some missteps, like the grating Panda Bear guest vocal on “Things Fall Apart,” just to say that when they occur they only serve to demonstrate an artist getting comfortable with his own ideas as an evolving canon of their own.

Dedication is definitely an accomplished record and a milestone for Zomby, rewarding continued personal investigation in the same way that Where Were U In ’92? found its success in laser beam focus and visceral appeal. It’s safe to say that if you enjoy/investigate electronic music to any noticeable degree, you’re going to encounter this record again and again, but don’t let the cult of enigma dissuade an honest personal listen. This is finally the record that assures me Zomby is getting a spot in the sky, that Dedication deserves at least most of the attention it’s getting. But if this becomes a forgotten sound before its time, at least Zomby knows that nothing is really dead, and that there’s always room to skillfully paint over the past without losing sight of it.