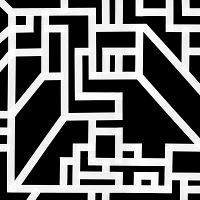 Zomes’ monolithic 2011 LP Earth Grid is essentially like listening to someone play 16th century religious music on a Casio rescued from a bonfire. To that suggestion concertgoers have reported striking confirmations, most often pertaining to the unassuming stature and general dustiness of Asa Osborne’s barebones setup and how greatly it contrasts the strange fullness and color of his less-than-barebones drone progressions. Listening to these tunes I easily conjure the image of Osborne slowly rocking with some dogmatic autism to his own lurching rhythms in such a circumstance, face buried in the keys stretched out in front of a small chair, and though I’ve never seen him play in person, the idea of the songs taking on a life that my home stereo can’t lend them is already hypnotically alluring in and of itself.

Everything about these somber songs defies their lush, dreamy evocations, and it’s Osborne’s ability to transport his listener so fully and effectively with only two or three fuzzy notes and what often sounds like a bad tape copy of someone sleepily banging on a cardboard box that makes Earth Grid a huge left-field standout for me this year. Earth Grid is, in my experience, completely unique in 2011 and otherwise part of a very small canon of records that really don’t feel attached to any time in particular. Some records manage that in a short range of consideration, but the range of Zomes’ timescale seems to stretch to the earliest reaches of instrumental music itself. If anything, these progressions are drawn from the most archaic conjurations of medieval sacred music, eastern drone, and modern lo-fi minimalism. But unlike many similar folks working today, whose work can often be at least reasonably described through technical methodology, these associations do very little to relate the universe-in-a-crystal romantic legends that Zomes’ music conjures.

In the fullest realization of that fact, it’s often impossible to tell exactly what sort of instrument is producing these archaic drones, which despite their rigidity, seem always to breathe with a looming sense of subtle medieval fury. Their compressed fuzziness strips away the frequencies that make the tones instantly recognizable as anything other than tones, like the effect of hearing a loud instrument from very far away. Zomes’ songs do in a sense evoke epic imagery, but do so with a strange relic regality that’s akin to listening to Bach at one-quarter speed on a Victrola, and in that anachronistic nomad sense, Earth Grid achieves that which so much drone, noise, ambient, and other comparable modern music seems to only realize in varying degrees of success: it detaches itself entirely from musical context and lets the transporting ethers of the pure tones take hold.

More than any other melodic recording this year, Earth Grid feels truly timeless. It tromped steadily down an ancient dirt path through a forest of pure sound like a hooded wanderer, traversing ever more bleak and more lush landscapes on a mystical journey, its stoic progression the only real unifying purpose. (My favorite tracks sound like doom metal made by Gregorian monks; I have to thank Asa Osborne for giving me the opportunity to say that in 2011.) Just give a couple of these tracks a shot—“Stark Reality” and “Alec’s Anthem,” perhaps—and you’ll quickly be submerging yourself in the Zomes realm like a fearless drifter with a thirst for the endless maze.