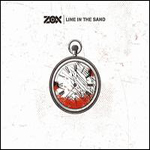 Line in the Sand

Were you only to focus on the most visible examples of the violin in rock music, you’d be forgiven for assuming that Zox, a band hastily described as “violin-laced pop-rock,” would suck. The frat-centric likes of Dave Matthews Band and mall-punk brats Yellowcard have done irreparable damage to the reputation of the violin as a legitimate rock instrument, obscuring the several positive contributions that the fiddle has made to the pop music canon. Petra Haden remains an indie-rock goddess, Andrew Bird is as well known for his fiddle prowess as his clever songwriting, and every last one of David Mansfield’s contributions to Dylan’s mid-70s Rolling Thunder Revue is utterly badass. And now you can add Zox’s Spencer Swain to this decorated list. By electing to utilize the violin as a raucous lead instrument to supplement their guitar-based pop, Zox add a unique dimension to their sound and distinguish themselves from the hordes of mediocre Warped Tour acts they often get lumped in with.

Originally hatched as a white-boy reggae outfit content to share bills with Sublime cover bands, Zox (their drummer’s last name) have gradually evolved into a viable power-pop band heavily indebted to the big fat 80s. Their jumpier numbers (“Towards Los Angeles,” “When the Rain Comes Down Again”) owe in part to the rhythm math of The Police, and frontman Eli Miller would appear to be a big Robert Smith fan, though far less mopey (and far more American). In contrast to their earlier material, the whole of Line in the Sand is clearly Zox gunning for Death Cab for Cutie’s fanbase (not for nothing that John Goodmanson is behind the boards), and like that band’s Chris Walla or Fountains of Wayne’s Adam Schlesinger, Zox place a welcome emphasis on the sheer clarity of sound. Simply stated, Line in the Sand is an excellent sounding record: Miller’s guitar licks are crisp and refreshingly free of compression and his vocals are easily digested on the first take. Further, his bandmates prove themselves to be expert arrangers, loading the songs with subtle instrumental hooks and noticeably lithe basslines (courtesy of bassist Dan Edinberg).

As might be expected of a band comprised of four goofy white dudes who met in and around Brown University, Zox don’t seem to traffic much in the way of angst, although most of Miller’s compositions focus on the teen-centric topics of unrequited love and examinations of self-worth. While his vocal presence has improved significantly since Zox’s formative years, he could still stand to dial it down a notch on his more, uh, earnest numbers (e.g. Iraq War pathos of closer “Lucky Sometimes”) where he flirts dangerously with sounding like the world’s biggest Cure fan auditioning for Spring Awakening. He fares best when he keeps his tone warm and conversational, like on first single “Goodnight,” a top-flite acoustic ballad which benefits from an excellent arrangement emphasizing Swain’s now swooping violin and a wistful seven note keyboard hook.

Even if Miller’s vocals sometimes grate, his songwriting usually holds up, with Line in the Sand‘s middle section especially effective. “Towards Los Angeles” and the hyper-pogo of “I Miss You” are both extremely catchy songs benefiting from clever production choices like skronky saxophone during the former’s bridge and, on “Miss You,” a fuzz filter treatment of Miller’s guitar. Then there’s the pleasingly awkward disco groove of the Edinberg-penned “Another Attack” in which he trades off lead vocals with violinist Swain for a welcome change of pace, not unlike the Stevie Jackson slot on a Belle & Sebastian record.

But Line‘s finest track, and the one which may hold the key to Zox’s future longevity, is “Seventh Avenue Prophet,” which once again showcases their skills as deft arrangers. A mini-epic of sorts that suggests a guitar-driven Postal Service with a particularly hyper violin player, Miller tries a bit too hard at the bridge when he details, “a beat up cardboard sign that said / Love will save us all!” But the ensuing string explosion is impressive, as is the sprightly guitar lead bobbing and weaving between Swain’s manic bowing. Sticking out from Line in the Sand‘s mostly three minute pop-rock songs, “Prophet” is all about a band that’s capable of crafting a multi-part suite with a discernible build-up and climax and, frankly, it’s something they should attempt more often.

Line in the Sand suffers somewhat from a crash landing towards the end; rocker “The Same” is underwritten, “Don’t Believe In Love” is far too Steve Perry for anyone’s good, and waltz time ballad “Lucky Sometimes” falls prey to melodrama with Eli Miller’s vocals shooting for a level of resonance that his band isn’t quite capable of attaining. But the majority of Line in the Sand lies in addictive, expertly arranged pop-rock from a band that gradually appears to be coming into its own. Some added depth to the songwriting would be welcome on their next record, but given Zox’s track record of evolution, there’s nothing to suggest they won’t be up to the challenge.