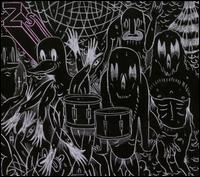 Consisting of one house-burning fifteen-minute composition, The Hard EP by Brooklyn trio Zs initially comes off as a diatribe of considerable defiance. Releasing music in such a stand-alone and iconic format is the territory of relatively few artists these days. Single, continuous tracks are often the stuff of label-sponsored DJ mixes, live music bootlegs, or pastoral experimentalism. Genre bending free-music like Zs’ is usually segmented into communicative fragments in the recorded format, bookended by lullaby-grade intro and outro compositions. However, this particular piece of music could only be this long and it could only be given to its audience in the form of one song. As the title plainly states, this is music done the hard way.

It’s true, I freely admit it; there are a million other bands playing louder and more viciously than Zs today. You or I could probably name five bands right now that are tearing open gaping holes in the sonic atmosphere. It’s really not the volume or the degree of dissonance in the music that ultimately makes a difference in the scope of progression. In recent years, close Brooklyn contemporaries of Zs like Gang Gang Dance, Animal Collective, and Little Women have succeeded in bringing dynamic, challenging sounds to the surface of eccentric pop. By melding an experimental/melodic middle ground with radical song-form conceptualizing, these acts have challenged the comfortably situated indie avant-garde status quo in ways that few have since Sonic Youth began recording for Geffen back in the early nineties. With a stated “concern for pushing the mental and physical limits of their audience and themselves as performers” Zs find themselves ahead of this troupe, transcending the haze of middle grounds with a controlled squank; aiming to take things back to a grueling square one.

In many ways, The Hard EP works as a wordless narrative, following the trio as they travel through some of the darker realms and decisively nameless places in musical structure. In the beginning tenor saxophonist Sam Hilmer, guitarist Ben Greenberg, and drummer Ian Antonio emerge suddenly from thin air, barking wild unison howls of purposeful mirth. This madness is contained, however, by the near-mechanical timing of the trio and an apparent will to follow a more arduous path. Surging statement after surging statement bleat out admissions of regret, led in an ever-diligent manner by Hilmer’s prominent high pitch notes.

Eventually they do reach the sea. Nearly halfway through, a welcome tide of melodic dissonance stops the trio dead in their tracks, taking hold of their sound and manipulating it with a coy theme. Despite its easy nature and warm invitation to complacence, this respite doesn’t last long. Just moments later, the trio are urged to resume their odyssey, deciding to risk running off into a thicket of dense anti-harmonies that are even more relentless and unpredictable than their first trials. Momentum builds once again; there are grunts of war-weary exertion amidst Greenberg’s meticulous string tweaks and Antonio’s drum roar. Then, rather suddenly, the carnage stops and an elevator for the undead appears. After the tumult the three emerge into yellow morning light with nothing to say, save for a small funky coda of a moody jazz song. Is this heaven? Could it be hell? Maybe some kind of music consumer purgatory?

Judging by their composure during a recent Vancouver performance, Zs aren’t the type of guys to make snide cultural protest or cold comment out of their music. It is highly unlikely that The Hard EP was meant as an ante up to their Brooklyn peers or creative music in general. However, this record could serve as a footnote of the evolutionary progression of its scene in 2008. While releases like these don’t easily find a wide audience in the byways of the pop underground, they do push those who listen to them to reconsider notions of sound and to question who is doing the heavy lifting in the grand scheme of things.