When I heard that this year’s inaugural Arthurfest was going to be a celebration of underground counterculture (is there any other kind?) featuring Yoko Ono herself, visions of unwashed bearded men and women danced in my brain. The festival, organized by Arthur Magazine and held at Barnsdall Art Park in Los Angeles on September 4 and 5, turned out to be a mix of the usual suspects: well-groomed baby boomers in glasses and collared shirts, Converse-clad hipster kids and, well, unwashed hairy people. Over the next two days I was to shake the hand of a member of the Olivia Tremor Control, learn to love Sleater-Kinney, receive a free Otter Pop, and realize that the lead singer of the Radar Bros. is old. Your mission, if you choose to accept it, is to join me on this
chronological journey into sweat and bass.

9:30 AM – The day begins as “Nathan,” “Brendan” and I drive down the 101, much like the Phantom Planet song. We stop on the way at a sketchy fast-food diner on Hollywood Boulevard to grab a late breakfast.

11:30 AM – We pull into the Barnsdall Art Park lot, only to be told that we’re going to need to “park on the street somewhere.” I wonder where the other 2,000 people are going to park. We end up driving into the lot of a nearby hospital, which we later find out is where we were supposed to park anyway. I tell Nathan that this festival is going to be“soooo indie.” 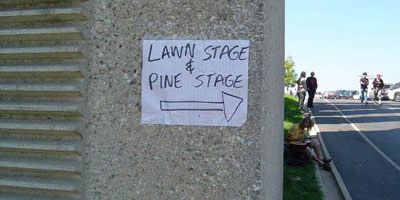 12:00 PM – We walk in the band entrance in the front of the park. A stagehand is helpfully taping up some directions, so we walk up the hill and have a seat on the grass. I realize I haven’t picked up my press pass yet, and wonder where Will Call is. The doors are supposed to open at 1:00, but we decide not to worry about it. Security ignores us, so we chill out for an hour and take bets on which celebrities will make the scene. Brendan calls dibs on Adam Brody.

1:30 PM – I’ve picked up my “press pass,” which looks a whole lot like a general admission wristband. Bands have yet to take the stage, so we scope out the booths: Arthurfest tee shirts are $20, but the Insound booth has lemonade for a mere 25 cents. A spin of the Amoeba Music prize wheel is just a $1 donation to charity. Brendan and Nathan both somehow win tee shirts (jerks), while I manage a license plate frame. 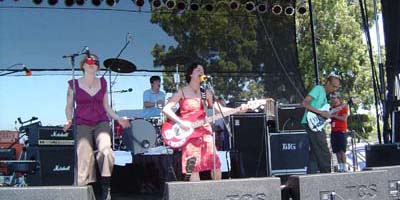 2:00 PM – We camp out at the Lawn Stage for the first act, The Night Porter. They’re ok, sort of an angrier Sleater-Kinney with a couple of guys and less musical talent. Brendan: “What do you think, Dave?” Me: “I think she has hairy armpits.” The bass was overwhelmingly, mind-numbingly loud and distorted beyond recognition, and sounded that way for every band that played on the lawn for the rest of the festival. For a first-year event, Arthurfest was very well-arranged – not too crowded, plenty of bathrooms and food stands, as well as an easy walk between the three stages – but the bass amp on the Lawn Stage sounded like diarrhea.

2:36 PM – In between the brief, half-hour sets, two middle-school age kids are sitting on the lawn, enjoying their popsicles. Awww.

2:45 PM – The Los Angeles sun is beating down on us lawn-goers. At least we’re not at Coachella. The cute girl from the ice cream truck starts handing out free otter pops to the audience. Awww. 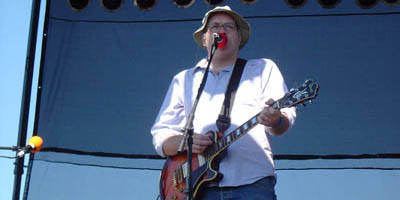 2:56 PM – The Radar Bros. take the stage. Jim Putnam has grey hair. They play the better songs from their recent release, the likeable Fallen Leaf Pages. I can barely hear them over that the low end, though: my notes say, “Super bass Jesus stop please.”

3:46 PM – Brendan and I head over to the indoor stage and get in line for Circle, a Finnish prog-metal band. They’re awesome, in a Ghost World kind of way – there’s the overweight, bearded rhythm guitarist, the skinny, shirtless bassist, the unintelligible keyboardist/singer (even if he’d been singing in a language I could understand, I have a feeling he’d still be unintelligible), and of course, the masked drummer. Is he Batman or Robin? Brendan leaves about fifteen minutes into their set. Unless I fell asleep, they only get through three songs in thirty minutes, though I’m pretty sure I fell asleep. 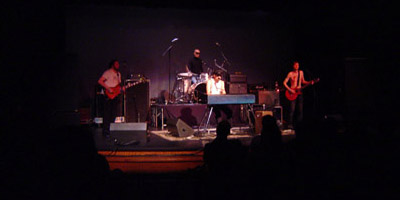 5:12 PM – A 1970s blaxploitation film starring Sun Ra and featuring lots of gratuitous nudity is playing silently between bands. Someone in front of me is having a conversation about the rest of the indoor stage acts: “Who’s Merzbow?” “Who’s MERZBOW?!?!” In a surreal Almost Famous moment, four balding men in their casual Friday corporate attire discuss Devandra Banhart in the row in front of me. I feel awkward and wish I had an actual press pass. Finally the next band arrives on stage; after a slow start, Magik Markers unleash a torrent of guitar feedback that doesn’t stop for half an hour. In the day’s only truly great rock ‘n’ roll moment, the lead singer gets all Roberto Begnini at the Oscars and starts climbing through the audience, only to actually be asked by security to get down. 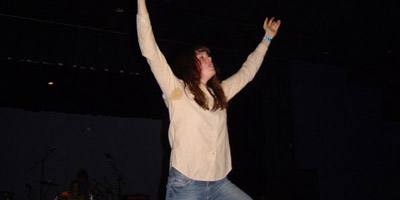 6:00 PM – Ben Chasny of Six Organs of Admittance starts playing. He alternates between solo jams and playing along with looped guitars. After a few songs, another guitarist joins him. They sound impressive, but I’m starving, so I head back to the booths for some pita and hummus from the vegetarian vendor. I make a quick bathroom run and – it never fails – pick the one porta-potty the girl inside forgot to lock. I’ve never listened to The Black Keys before but they’re sounding pretty great, so I walk over to the lawn to watch them and end up standing behind the Radar Bros.’ Jim Putnam. Arthurfest was very relaxed; throughout the day, band members were hanging out and taking in the performances along with the rest of us. 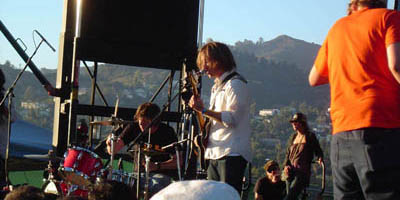 6:12 PM – No Adam Brody or celebrities of any kind in sight. I realize that The Black Keys sound so good because they don’t have a bass player. The guitarist plays the bass line with his thumb while he jams the riffs with his fingers. I’m reminded of The Constantines, if they liked Lynyrd Skynyrd a whole lot.

7:45 PM – Over at the Pine Stage, folk singer Josephine Foster is playing a nylon-string guitar as quietly as she possibly can. Her shy warble and slow strumming is endearing, but I can barely hear her over Sleater-Kinney. Back to the Lawn Stage. (Best shirts of the day: “DEEERRHHOOOOOFF” and “Xiu Mutha’ Fuckin’ Xiu.” Dude wearing the second one was with his mom. I also saw a guy wearing a shirt for Clint Eastwood’s restaurant in Carmel, where my girlfriend happened to be having dinner at the exact same moment. Coincidence? Or is our indie-rock romance written in the stars?) 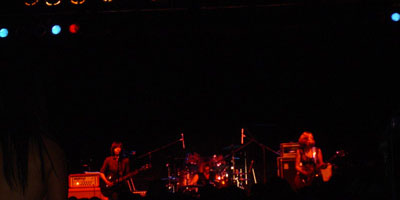 7:53 PM – Even from behind the soundboard, the ladies of Sleater-Kinney look hot. I’m not a huge fan of The Woods, but it doesn’t take long to convince me that S-K are easily the best performers of the day, and not having a bass player to drone them out certainly helps. Not only are they imply the loudest band, they’re also the tightest. What stands out is not the distortion or the technical skill – though the drumming of Janet Weiss is unbelievable, especially when the band segues “Let’s Call It Love” into “Entertain” – but the fact that under all that, they’ve written some great songs. I was clearly in the heat of the moment: my notes read, “Wanky guitar solo! Yes!!!”

9:00 PM – The capacity crowd is watching a surreal Henry Jacobs film and not really paying attention. I find my friends again and we agree to watch most of Sonic Youth’s set before leaving early to beat traffic. SY start playing at precisely 9:33 PM, and after precisely one minute of that fuzzy, throbbing bass rendering Kim Gordon’s vocals inaudible, we decide to peace out. “Take a couple of quick pics and then we’ll go,” Nathan says, so I get this shot of Thurston Moore’s amazing hair. 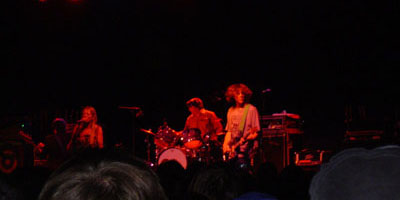 Next time: Buying Olivia Tremor Control merch from John Fernandes, getting front row for Spoon, the triumphant return of our friend Foopie, and an incredible surprise appearance by Devandra Banhart!