Where were we? Oh, right. I had even higher expectations for Arthurfest, Round 2: Spoon, Yoko, and of course, a final stop on the Olivia Tremor Control reunion tour. Maybe today we’d even see Adam Brody. Or at least they’d fix the problems with that bass. Unfortunately, neither was to be, though the day turned out to be another impressive series of rousing performances.

1:20 PM – I arrive at the festival, two new concert pals in tow. Spoon is definitely playing a sound check over on the Lawn Stage. Remembering the ease of entry yesterday, visions of the handsome young Britt Daniel sweating in the noonday sun begin to coagulate in my already dehydrated brain.

1:50 PM – So much for the sound check. Security is tighter today – they’re actually making us line up to check bracelets. 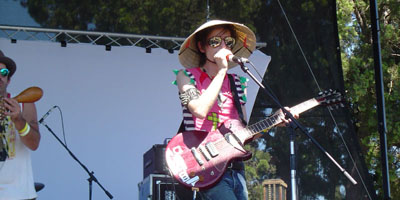 2:00 PM – We start the day on the Lawn Stage with Future Pigeon, a latin/reggae kinda deal whose taste in fashion is unfortunately superior to their music. The unapologetic bass pierces through my Amoeba Music earplugs. Still, there’s a pretty sizeable crowd already so we settle in on my beach towel and prepare for a long afternoon. Foopie, fellow poor indie-obsessive and my ride to that fateful Daedalus show, calls me on the road and asks if it’s possible to sneak in. Tickets at the door are up to $47, so I wish him luck and get back to the stage. One of my new pals is here expressly for the next act, so I expect them to be worthwhile. 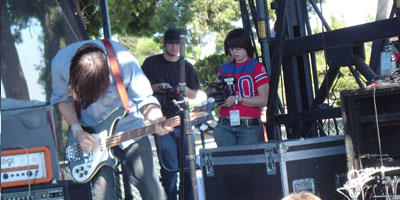 3:02 – Arthurfest being the mishmash of genres and bands that it is, Dead Meadow end up being a little too heavy for my taste. Their technical prowess is remarkable, though: the guitarist broke a string in the middle of a song, and after a few furtive glances to the side of the stage (presumably looking for the guitar tech), still tears into what Jack Black would describe as s face-melting wah-wah solo. Speaking of Jack Black, it looks like I’m going to have better luck running into celebs at my local pizza parlor. (Turns out Adam Sandler eats at Enzo’s. Who knew?) My two-year dream of talking smack with Adam Brody dies a quick death; it’s almost time for Olivia Tremor. 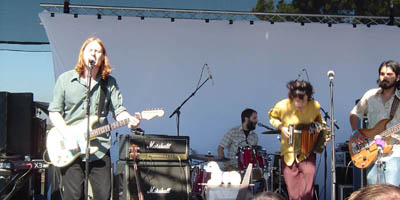 3:57 – The crowd rises to its feet. The Olivia Tremor Control is clearly beloved here; they’ve drawn one of the biggest crowds of the day and play an enthusiastic set to massive applause. They run through what amounts to a greatest hits, dropping “The Sylvan Screen” from Black Foliage: Animation Music Vol. 1 right in the middle. The concluding multi-part harmony, rearranged with added guitar breaks, is easily my favorite moment of the weekend…right next to one of the band putting down his saw(!) to chase a plastic lamb around the stage with drum sticks. Or the incredibly loud tuba player, whose deafening thump was forgivable thanks to the ridiculousness of a rock band including a tuba player. 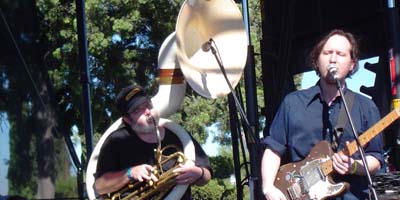 5:00 PM – I sneak around the side of the stage to the fenced-in band area to hang with John Fernandes, bassist/clarinetist/violinist for Olivia Tremor. I shake the man’s hand and congratulate him on a great set, and we discuss the fuzziness of that bass amp. Fernandes tells me he’s used to playing his “punchy” amp at home; the Arthurfest amp, of course, being anything but. With that out of the way, I buy an OTC tee shirt and walk to the Pine Stage to scope out Vetiver. Ooh! Ooh! There he is! 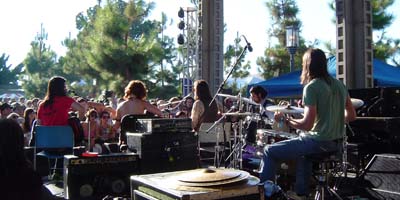 5:18 PM – Vetiver being one of the many bands at Arthurfest I’m not overly familiar with, I take them for a punchy (their bass sounds fine) alt-country band. Devendra Banhart casually strums along with the group, who one friend later describes as “looking like the Eagles, all sitting there in a row with their guitars and sunglasses. I couldn’t get over it.” We both hate The Eagles. Vetiver plays a song that sounds like “Ooh La La,” which, as you know, is by The Faces – who were probably precursors to The Eagles. It’s time for some food.

6:35 PM – Foopie, Banhart fan extraordinaire, has somehow made his way into Arthurfest just in time for the idiosyncratic folkie’s performance as the “surprise guest.” (Perhaps inevitably, one rumor had the spot going to Jandek. I was holding out for Paul McCartney.) Banhart plays a great set, focusing on new songs from Cripple Crow. He introduces one of them, a cover, as being a “song by Lauren Hill and the Fugees, and Charles Manson in the 60s.” The band starts out with “That Thing” and presumably segues into the Manson song (don’t ask me, I heard the Manson record once and was way too freaked out to ever listen to it again. Though if you’re in the mood for ominous folk music with a major 7th chord, “Look At Your Game, Girl” is a pretty nice song. Um, for a serial killer.). Foopie takes this shot: 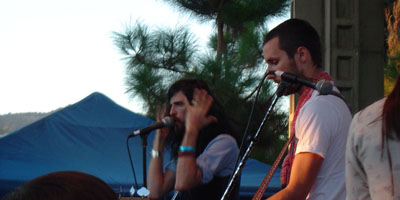 Then Devendra invites “anyone who writes their own music” to come up on stage and play his guitar, so this guy does: 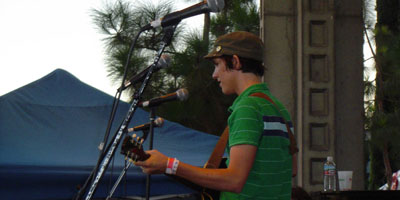 He plays a really nice song and gets hugs from the band. Nice. I realize I have five minutes to get to switch stages and get to Spoon.

7:13 – Olivia Tremor’s keyboardist sees me on the way to the lawn wearing my brand-new OTC shirt and thanks me. Awww. I miraculously make my way to the front of the Spoon crowd, which is about the same density as it was at Olivia Tremor’s performance three hours earlier. It’s not quite as crowded as Sleater-Kinney’s audience, but that’s their loss: Austin’s finest play a set curiously top-heavy with oldies, including “Anything You Want” from Girls Can Tell and a very grim “Paper Tiger.” They play all the best tracks from this year’s Gimme Fiction, or at least all my favorites: “The Beast And Dragon, Adored,” “I Turn My Camera On,” and finally, gloriously, “Sister Jack.” Holy shit, “Sister Jack.” 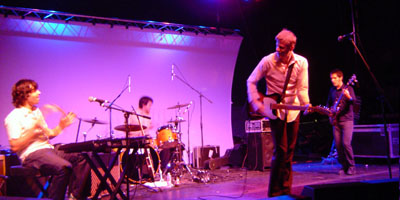 After that, there’s nothing to do but wander the lawn aimlessly, dizzy with the power of open chords and Big Star melodies. In the second miracle of the hour, I finally run into my friends, who – it never fails – neglected to bring their cell phones and disappeared some time after Dead Meadow. We’ve got an hour ‘till Yoko Ono goes on and the Cat Power crowd over at the Pine Stage is daunting, so we agree to call it a day. Unwilling to leave without at least making the attempt to get a photo of the coy, beautiful Chan Marshall, this is the best I can do (see her?): 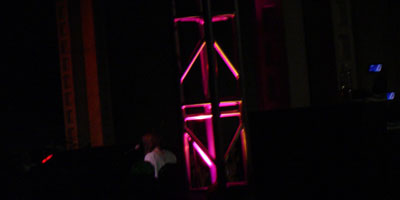 8:33 PM – After two days of music alternately awe-inspiring and befuddling, where bands without basses rocked the hardest and the group with the tuba player had the best songs, I head home satisfied. The six inches of tuna sub gently murmuring in my belly on the drive back doesn’t hurt either. See you next year, Arthurfest!