There’s an off chance someone reading this might be unfamiliar with the Dismemberment Plan, one of the lodestars of indie rock as it came to be codified in the early 21st century. The band started out as just another very good DC post-hardcore band, all noisy guitars and nimble rhythms and an eggheady, nasal singer. Beginning with the band’s second album, 1997’s …Is Terrified, they began to incorporate elements of pop, dance, and plainspoken lyricism into their music. Such an idea was by itself nothing completely new—at this time local peers the Make Up were incorporating gospel music, of all things, into their energetic racket, and Sonic Youth were covering Madonna as far back as 1986—but the band’s take on it was considerably less deconstructive and subversive than it had been in 1997. The Plan actually believed in karaoke and Prince, or at least believed to the point where it was comfortable with confronting their audience with its own ossified prejudice that the visceral rush of such music can be sublimated by anti-capitalist, moralistic dogma (or, at best, only enjoyed within those contexts).

If such an idea seems ludicrous to younger readers, it’s because Dismemberment Plan decidedly won the war. The Plan’s vision of indie for the masses—a danceable, easily parsed, interested in the concerns of the twenty-something collegiate awkwardly navigating whatever romances and careers they can get from their English degrees and social connections (and little else)—was alive and well in the spirit, if not the sound, of every big name that ever headlined a Chicago summer festival. They helped their own cause by making two of the genre’s best albums, 1999’s Emergency & I and 2001’s Change. These albums sound as sonically audacious, psychically troubled, and physically bracing as when they were released. I can verify this because I had to spin them repeatedly in the wake of Uncanney Valley, an album so bad it made me reevaluate not only my appreciation for the band but my already dyspeptic view of big ticket indie of the ought era. It turns out, this is it: Arcade Fire can win Grammys and sell out Madison Square Garden and say nothing, James Murphy can remix David Bowie and it feels like a cultural victory, Occupy Wall Street can be deflated by a couple of body odor jokes, little of the music made by and for those post-collegiates reflect the massive and unrecoupable student loan debt that saddles them for the benefit of a criminal banking system, and it turns out that the Dismemberment Plan—or at the very least lead vocalist Travis Morrison—when removed from the tensions of twentysomething confusion and lovesickness, are the most goddamn boring and insipid band on the planet.

But thankfully I can authentically enjoy “Wrecking Ball” without some lecture.

Uncanney Valley put me in a bad mood. Obviously all of those things probably would have happened without D Plan, or would have happened with a band that was worse than them. Fortunately I also exist in this historical anomaly where I can be disgusted by people I respect without having to pay for it, and chart my experience in real time. The livetweeting shown below was a way to kill a free night, something that would entertain myself and the eight or so people who would be interested in such a thing. I don’t typically enjoy capsule reviews and think any of the varied ways I’ve seen criticism reduced on Twitter serve little. It’s good for zingers, and lousy for last words. Those things can, however, be a good way to start a conversation (or else be followed by a retinue of pornbots), which is what social media has always been to me: a safe place to collect my thoughts in public, second guess myself, engage professional critics and fellow semi-amateurs alike as peers. But, as the myriad typos and grammar mistakes show, this is not the best format for a writer like me. It’s a happy accident that Uncanney Valley lays all its cards on the table at once and requires no further thought, no further listens. And maybe this represents the end of an arc began, in large degree, by the Plan and its acolytes. Because the basic thesis of the poptimists is completely, inarguably right: the only responsibility a musician has is making good music. But when the music stops being good, there might be more to answer for. 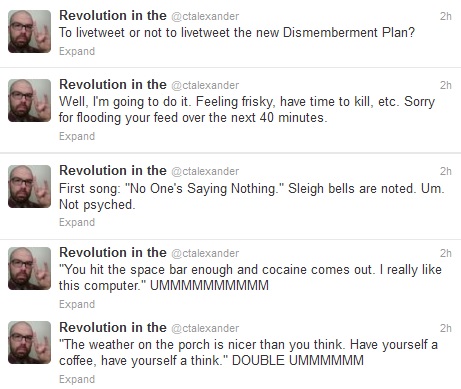 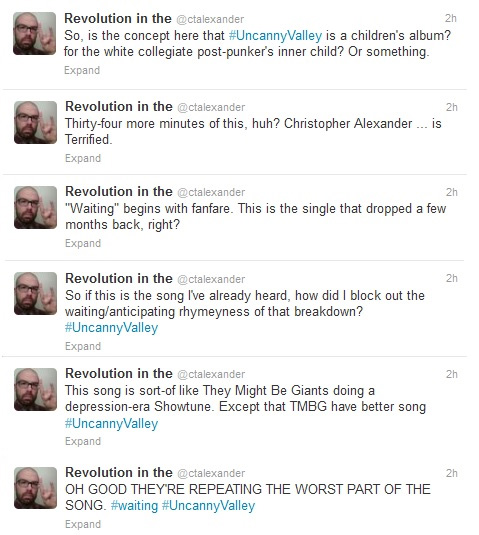 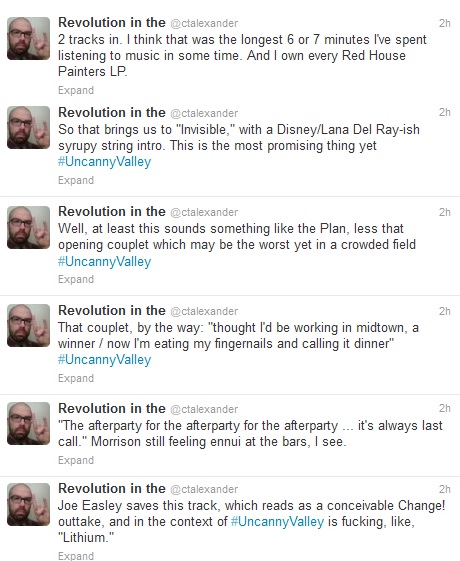 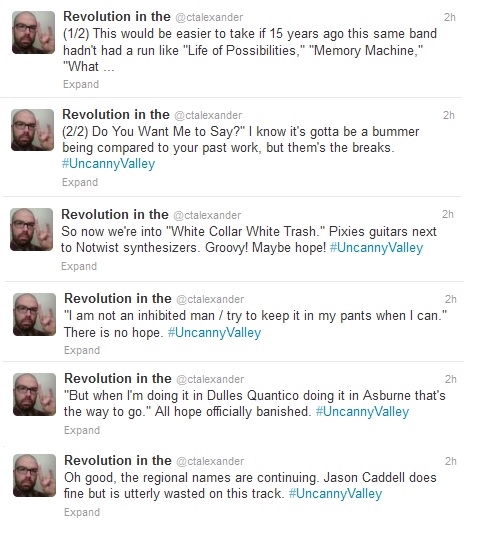 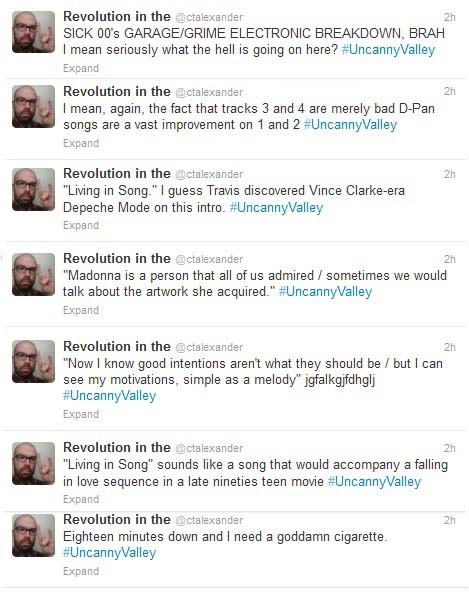 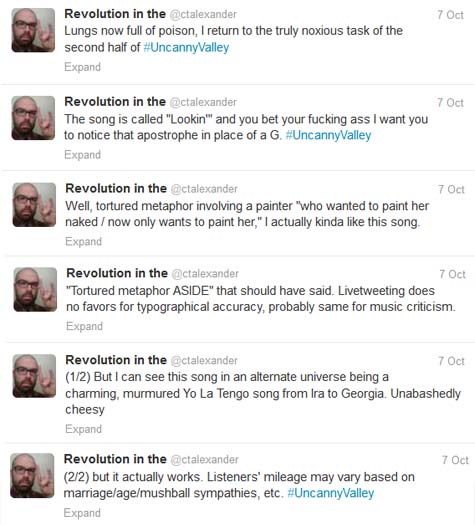 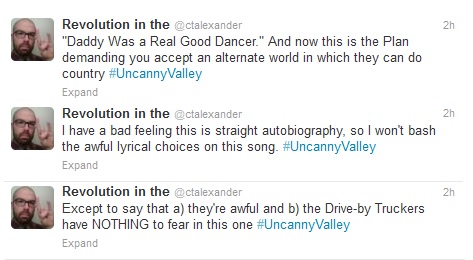 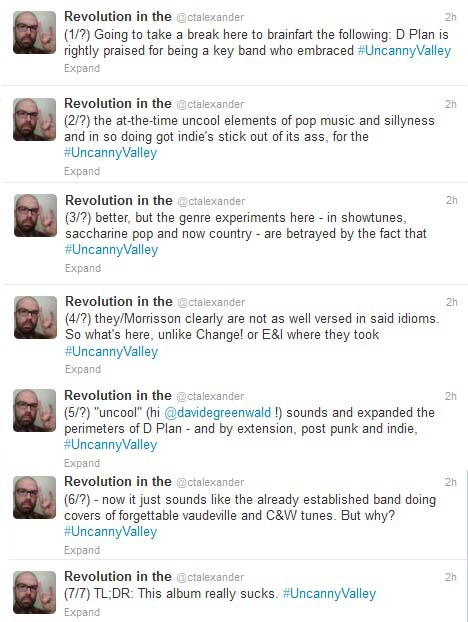 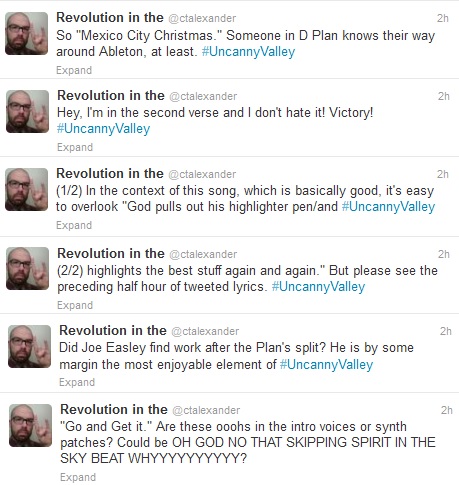 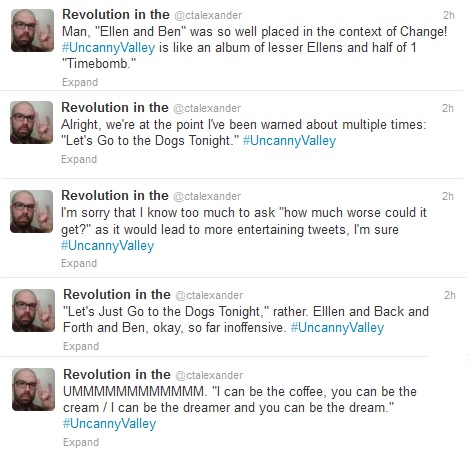 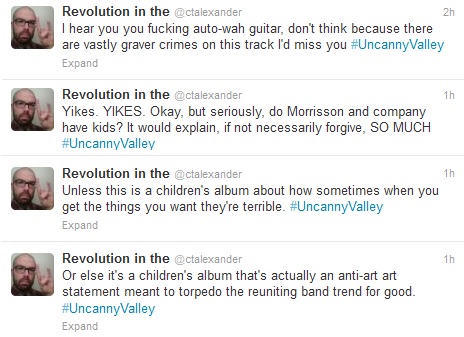 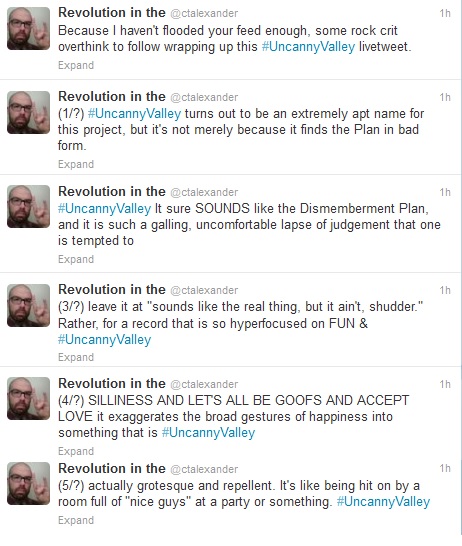 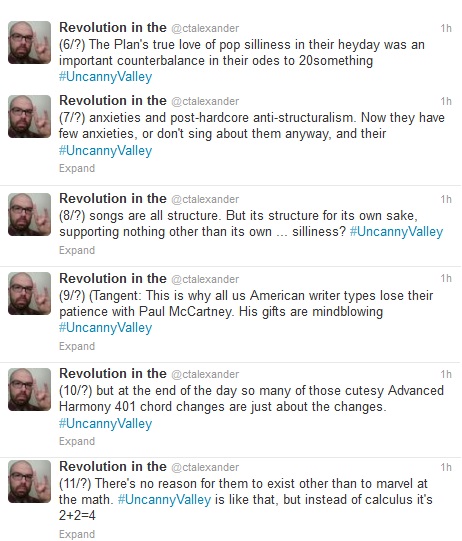 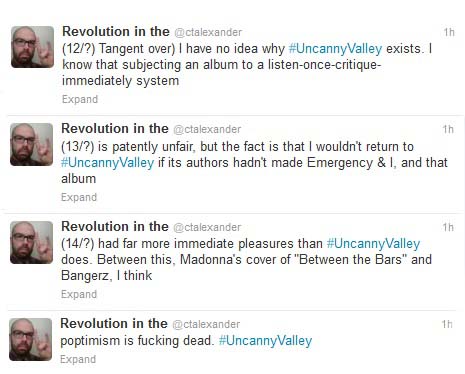