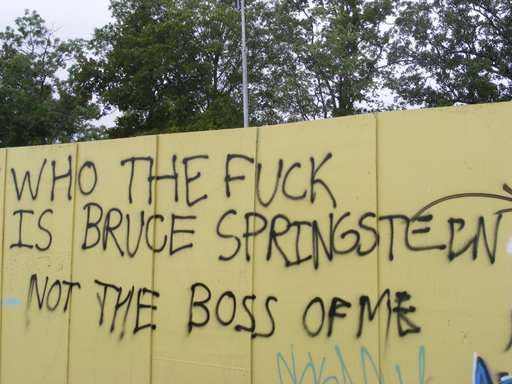 We are in trouble.

Not Bonnaroo. Bonnaroo is the best festival I’ve ever been to, curated lovingly, forward-thinking, good-vibed, and whatever. It’s the original trilogy to Lollapalooza’s prequels. I can do nothing but recommend it, and I cannot see this changing. But its peopled alleys are changing, its clutter, its crowds. The hippies are now safely stashed behind booths, peddling us their wares like an indigenous people paraded out for colonial bemusement. They proffer us their stash-holders and fish tacos and, occasionally, sweatily, their various intoxicants, and then we, Bonnaroo attendees, take drugs, get dirty, jam in their places, wobbling like they would. It is fun for the individual, mud-caked in imitation hippie frock and moan, stoned. But seen in throbbing mass, it galls.

Certainly, somewhere, someone is being dumb. If hippie culture is all secondhand—their ethos bastardized over forty years, their dreads pilfered from, y’know, actual Africans, their musical heroes growing old and increasingly frazzled and, one must logically assume, insane—what does it say of we monied elite who now forsake our normal lives to escape into it? It’s beyond secondhand; it’s beyond hands, unholdable. These people—categorizable, really, as “people in their 20s,” which, fuck, equals me—are beyond culture. Most of them probably came from towns in Ohio like I did, got a degree like I did, moved to a big city like I did, maybe the same one, maybe go to the same shows and eat at the same pizza places. We are all entering the same data to buy the same bus tickets (this is a metaphor). Maybe they came down to do the same drugs, or at least to get swindled by the same dubious “dealers.” Speaking of which, guy with “Smith” tattooed on your back, you are a charlatan and will die alone. And you have an awful fucking tattoo. And owe me $40.

Really: someone should’ve anticipated this. The Boss, in throes of wild confusion early in his set, sent out an anachronistic warning against the proverbial brown acid when the real problem from everyone I spoke to was not bad but fake acid. Or fake blow, or fake X, or fake whatever else the kids are into. And in the Boss’s witlessness on this subject we see a microcosm of the black hole we’re facing: because I for one would rather have a bad trip than nothing. I for one would rather risk hell than purgatory, and the Boss—rock and roll’s great I Am —cast his voice, for maybe the first time in his career, out into an enveloping nothingness. It swallowed his thunder and he received no echo and he, holy denim’d fool, continued unabashed. I’m seeing other news outlets report a thundering Bosstravaganza from Saturday’s three-hour set, and I’m wondering if they bothered to leave the press tent or if they deigned to talk to the muddy stoned half-nude throngs that clamored, unequivocally, that they did not give a fuck about Bruce Springsteen; that they would not attend his headlining set; that his set was a vaguely slimy pile of bologna in their weekend’s otherwise rich, nutty Phish sandwich. Certainly, in the media’s defense, from the VIP bleachers it must’ve looked like a Springsteen show.

It certainly sounded like one, shook like one. But his set was an unqualified disaster, somehow being among the most awkward things I’ve ever witnessed and, kinda, boring, despite striking all the right poses and rocking all the right triumphant flourishes. I’ve never seen the Boss before and remedying this situation seemed purpose enough to make the trek anew amongst the hippies and the red Tennesseean clay for another hot dopey weekend. I told friends before leaving that his set would be an all-or-nothing occasion for me, that I’d either maintain a journalistic sobriety for the event, Momentous and Aged, or like drop acid and drown in stimuli. The hips (-pie or -ster, lineage was mostly unclear) chose a third route: sleep, mostly, cuddling in various curlicues and snoring politely even up at my vantage point, a few hundred feet from the stage in front of the sound booth. The night before it had taken a healthy grip of whiskey and a loud display of Beastie lyrical knowledge to shove and bounce to this same spot; on Saturday, for Bruce Springsteen and the E Street Band, I walked to this position. Casually. I could’ve walked closer. As his mighty band rumbled and cracked and as the Boss howled with that Christfire conviction, onetime music-saving and sonorous, the hips wandered out, fifteen at a time, unmoved. It’s not as if they had an alternative: headliners are scheduled against no one. These people—most of the attendees, almost everyone who made the trip—opted instead to sit somewhere else. To not stand. To nap, if the mood overtook.

At some point, I left too. I also, after all, am in my 20s. I also, after all, was part of this crowd and thing, am also probably in trouble when my dad reads this. There is no greater sin in our parents’ minds than irreverence toward the Boss, who is Theirs; for us he has become at last the dinosaur of rock to which he once seemed anathema. Our parents are ashamed of us. And then at some point I rationalized: this is not seeing Bruce Springsteen. These people are not seeing Bruce Springsteen. That is Bruce Springsteen but I am not at a Bruce Springsteen concert surrounded by his acolytes. There is no zeal or sacrifice here. I am watching Springsteen smack headfirst into this inexhaustible indifference he had once seemed a torchlight against, and, fuck, that’s not something I care to see really and so headed to my late-night show, the Boss loud against encircling darkness. The few that remained seemed to be doing so dutifully, cognizant that Here Was Bruce Springsteen but, I am certain, texting friends that they’d meet up soon enough. These were better children to their parents than most of us.

The problem is not that those people would rather be waiting for Ben Harper to hit the stage—although, truly, Ben Harper fans remain a problem, and will be dealt with in time. The problem is: who the fuck has patience for three and a half hours of rock and roll anymore, anyway? Even if it is the textbook definition thereof? The Beastie Boys’ set was triumphantly insubstantial, Mix Master Mike dropping new beats quicker than the Beasties could even finish a verse, and Beasties verses go, what, six bars at a time anyway, right? It was flashy, loud as fuck, and Nas showed up—hip-hop as the Xbox Live Arcade. They even charitably chose to ignore their entire most recent album, what with its Rolling Stone-approved weight and bullshittery. And, really: someone should’ve anticipated this. Springsteen’s artistic flashpoint was his post-hippy, post-drug triumphalism; there is, after all, no drug that makes Springsteen sound better. And there is no musical accompaniment that properly prefaces Springsteen. Springsteen is his own drug, his own opener, his own festival. Give in entirely to this man or get the fuck out.

We give in to nothing. The singularity of his artistic presence is entirely lost on we who clatter riotously about genre and artist and label and thought with abandon, like Grand Theft Auto with all the cheats turned on. We reject, entirely, oneness, and so Springsteen’s inherent monotheism. Appropriately enough, we ate up Girl Talk on Friday, out of our minds. And writ large on the screen behind him was the creed, “I am not a DJ.” Of course he is not. And we are not a generation. All our claims are negations. We know everything, see everything, consume everything, are bored by everything, find everything funny and contemptible, we are all liars about ourselves and our histories, we are boring, we are sick, we are listless and sick and suffocating and suffocated by our own arch wit, we are stifled by our wit and our boredom, we have grown up believing in pornography as an inalienable right.

And we sell fake drugs to each other. We’re fucked.