Things We Yelled At Ourselves

“Boobies!” Asher Roth cried to his throbbing wet crowd, and the throbbing wet crowd spit the word rapturously back into his face. It was sticky in the hot, sopping day and Roth grinned naughtily, chin dripping. As any Chicagoan will sneer, this was his crowd: frat brothers on road trips, crashing on Brown Line-based older brothers’ couches. This crowd was shockingly accepting of Bud Lime as a beverage option. This crowd was one thing, and it was a thing that tucked its Hollister shirt into its cargo shorts. It was a thing that loved drinking, and lined up long to do so prodigiously; loved college, as Roth capably suspected; loved, at last, boobies, as Roth dashingly proposed with a naughty grin, as if to suggest with a brotherly elbow nudge as a skirted TA walked past: “Ay!”

“Let’s hear it for boobies!” Asher Roth intoned later in his set, recalling his earlier incantation along similar lines—and, with a carnal pulse and our veins thick with blood, we let it be heard for boobies. Because Lollapalooza, fifteen years into its storied life, is become now a sort of superboobies. Indeed, if pop music is fucking, then in its target market, its literal price, and in its sense of proportion to the way things actually occur in the universe, Lollapalooza is a set of heaving, plasticine, rugby-ball sized fake breasts. Its very layout was anchored by twin weights of human traffic, two heaving, rounded mammaries of fields made bustingly plump by music, and by people as interested in listening to this music as silicone is in being flesh—just bands of any variety, whatever means necessary to fill these fields with pert, ready consumers aged 18-35, preferably college educated, straight, and unmarried. In other words: me! (Ay!)

“I love drinking!” Asher Roth divulged, and so did I at Lollapalooza. Despite the press tent’s generous supply of free booze I still found myself sneaking in supplements, delightedly wincing and staggering about the twilit throngs in thonged flip-flops. And just as enormous fake breasts retain a whisper of the appeal of unaltered ones, so, if indulged properly, was there fun to be had at Lollapalooza. Mid-coitus anything can be fun, bros assured me. We indie folk can exalt Merriweather Post Pavilion‘s crossover appeal all we want, but Animal Collective remain a far cry from Wilco or Spoon just yet, and it was both interesting and heartening to see their monstrous knob-twiddling blow the minds of a few stoned thousand. Same with Dan Deacon, who in a desert-like Saturday afternoon setting raised an idiotic shitstorm that seemed to find even itself ridiculous. In on the joke, Deacon laughed louder than any of us—except for maybe Bradford Cox, who in his set managed to diss the Killers, Dr. Dre, Vampire Weekend, the stage on and the audience to which he played and, with the air of a completist, his own band Deerhunter. It was the most electrifying set of the festival, a pock of brash ugliness subsumed by larger attractions like a mole on a beautiful body. Portugal. the Man and Crystal Castles also wrecked shit righteously on their respective sets, or so I hear: I report secondhand, having apparently been too busy drinking or something to attend. (Anyway, whatever: mid-“Lolla” one will forsake anything for a Bud Lime, just as mid-coitus one might also find himself entranced by the monstrous heave of fake tits. [Ay!])

“I love lunch!” Asher Roth never quite got around to yelling during his set, although his base enthusiasm for the experience of being a red-blooded American Man™ may well have eventually taken this form. We too loved lunches and 2% milk and dessert, and their unspoken suggestion hung in the air richly. “Ham sandwiches!” the audience thought with riotous aplomb back at him. “Twinkies!” we didn’t yell. “Puffy Cheetos!” We ate up him and the thick air and thick lights and chicken satays, stimuli gang-raping our thick skulls. I would stagger in sunglasses through sunset fields to the media tent and gorge myself on fried chicken, lemon meringue energy bars, bags of fuzzy popcorn. The great circle of life continued in endless banks of portable toilets, people snacking in line helpfully. We were ready to shit! The circle of consumption was tight and morally correct. Roth, that rake, was right, and I was impervious to his logic. We love boobies with the same avidity we do food. To wit: 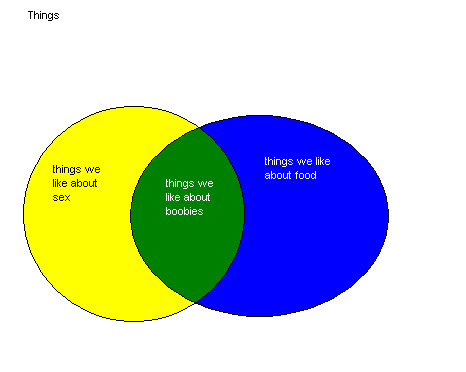 Why? “I love having a press pass!” Asher Roth never even thought during his set, because he didn’t have one, but inasmuch as I was that ginger imp onstage and he was the entire crowd, which is as valid a lens to view this bilous, mean, glorious inanity as any, so be it. “I love college!” I yelled to the thousands of Asher Roths in the crowd, and they loved it and me back. “And I love drinking! And I love having a press pass!” The chairs and shade and offset gladhanding: I feel oily, machine-running, efficacious. Not cog but engine! The media is the unmoved mover, the brain which moves the finger which flicks the dominos which puts you fortieth in queue for a Bud Lime. I was the media; Lollapalooza was mine and Asher’s to exploit. I and Asher exploited Asher and me. And you! Lollapalooza was our crowd, confidently and decidedly so. It was as expensive and regrettable as fake breasts, meaning: not entirely, and not at all for a certain (and large, monied) audience. The purpose is served. The breasts are bigger, two rounded hillocks peeking out of shirt tops like a second butt. And the bros are drunk, and that is Ben Harper jamming over there. It does not move like music. It does not feel like music. Ineffably, though, it is, and Asher Roth is its definitive nipple—the stiff, giving tip of the breast, wet with saliva, moving at our continued caress from first a crownlike bump atop the breast into, eventually, a full appendage off it, a third-inch of blessed tactility to our eager, paying palmfuls.