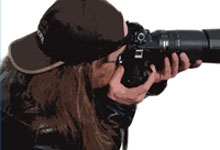 An Open Letter to all Concert Photographers

Hi! My name is Clayton Purdom, a Chicago-based writer and semi-regular attendee of live musical performances. I see and interact with a lot of your kind, and had a couple of observations I wanted to share with you, quickly, that may help you go about your job:

1) Assume that everyone hates you. This is because they do. You know how in a crowd there’s that guy that shoves his way in front of you and then stops, and everyone that has been standing there hates that person for ruining their viewing experience? That is you, all the time! I know that you sort of sneak around, leading the way with your telephoto lens and trying to be inauspicious, but in the end you are just a person who has fucked up my situation. I know that that spot gives you a nice sight-line, and I know that because it used to be my sight-line. Now I’m looking at some bro’s neckhair. This is why everyone hates you. However:

2) You are more annoying than a regular person stealing my position, because a regular person does not come equipped with fucking flashbulbs. You draw attention to yourself. Also, I know that the whole photojournalistic ideal is that you take a million pictures and one of them ends up being art, but this is totally precious and totally bullshit. All of those pictures look the same. That one where the singer is singing, and the guy is playing guitar? That’ll suffice. Which leads me to this point:

3) What you are doing is stupid. You know what most indie rock bands look like when they’re fucking killing it? Every other indie rock band. And you know what they look like during a boring set? About the same as when they’re killing it. I know that these shots are going to be tits on your blog and all, but the next night this band is going somewhere else, and there will be another shithead taking pictures of them there. Their photos will look identical to your photos. They say a picture is worth a thousand words, but yours is worth exactly as many as are in the band’s name, and besides, even if you were like an SEO ninja your shit still wouldn’t come up if I Google-image-searched the band name. If you’re attempting to capture something about the band in an image, contact their PR reps and arrange an actual session, don’t flood the world with more shitty pictures of them singing or whatever.

4) Audiences deserve to watch a show without you, and the world doesn’t need your stupid photos anyway, but moreover, artists deserve to perform without you. What if while you were doing your real work, like taking photographs of brick walls or pasta dishes or whatever, I walked up to you and started honking an airhorn at you? Just periodically, without any logic to the intervals, honking a goddamn airhorn in your ear while you’re trying to get your photograph on. This is the rough equivalent of expecting musicians to “not mind” you.

Anyway, just a few notes, All Concert Photographers, to keep in mind while you’re fucking up everyone’s good time in the future. Oh, also, your scarf is ridiculous. Whichever scarf you’re wearing.