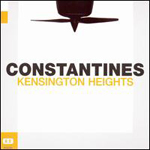 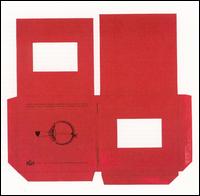 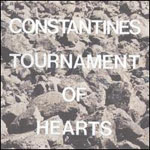 Pinning a style seems to be all the mode these days, an endless music fashion obsession, where bands bleed image, association, and chic--er than thou, forced panache. Hipster--ism is the new art--rock religion, and the culture can seem cool, but has embedded in it the venom of poseur--ism rather than connoisseur--ism. Simply put, a ton of bands tend to be obsessed with the trappings of being respected rock bands -- the art--damaged fashion, the store--bought torn jeans or mod get--ups. Whatever happened to the days when Fugazi would thrash around stage like animals and get their fans to do so as well? Today the poor substitute is the occasional hardcore band or nu--metal tripe that induces ungainly mosh pits of fans without music taste. Plus, mosh pits just suck. Though there is some decent hardcore.

Ack, ack, ack. A Constantines album a step short of greatness. It’s a terrible predicament, when your winning horse stumbles one length before the finish line. Goodness knows I’d like to sweep reservations under the rug, point my finger at the great tracks here and cover for one of my favorite bands. But Tournament of Hearts is short of greatness.

It’s also short by the group’s typical standards of length. It’s also short on cohesion, and short on the kind of deceptively complex dynamics that made their debut and their sophomore album such unassumingly great indie rock albums. Those albums dug deep into the palimpsest pavement of rock and traversed whole cities of disillusion on barbed-wire wheels of guitar fury, rhythmic intensity, and begrimed poetry. Tournament of Hearts rattles to an uneasy trot through the hung-over early-morning streets, raises the occasional cry, and then gets lost in the crowd.

Not that the band’s engine has sputtered or stalled – this album is still of significant quality – but its roar has become something of subdued growl, its reliability less impregnable.

The initial revs are promising enough; perhaps only the Constantines can so convincingly pull off an opener that’s carried by no more than an imposing rhythm, a single base note, a sustained guitar squeal, a thrashed chord and Brian Webb’s rougher-than-asphalt vocals. Like the brilliant “Young Offenders” from their eponymous debut, its simplicity is consecrated by its seething energy. “Hotline Operator,” despite its restraint, could tear down whole city blocks with the amount of suppressed energy beneath its ominous rim-taps, chunky chord picks, and snaking chorus guitar-lines. As it happens, the song does eventually fulfill on its foreboding promise, erupting into cataclysmic vocal and guitar release, making a fine argument for its elevation to the ranks of this band’s best songs.

Shit, even though Webb commits the cardinal sin of rhyming “above” and “love” – in a chorus no less – even that error can’t diminish the dynamic energy of “Love in Fear.” And hell, both “Working Full Time” and “Good Nurse” are among the better tracks the group has ever recorded; both take great advantage of the unpredictable rhythmic flexing that makes the band intellectually interesting while driving home powerful melodies to rend the gut.

But the awkward “Thieves,” with its disjointed transitions and movements, is dead weight on the album’s second half, the neck of which is only further dragged down by the well-meaning but poor closing ballad “Windy Road.” The ponderous pace and power chords of “Lizaveta” nearly sludge over a song that otherwise drives its city-tale on a chugging cart of fret-work complexity and tonal subtlety (best example of that kind of work here: “Hotline Operator”). “Soon Enough” is nearly alt-country, disrupting the more subdued aggression of the disc’s first half with a diluted rhythm and weak hooks.

Perhaps what’s most frustrating about these missteps is that their combination with the album’s brief length (at least 10 minutes shorter than their previous efforts) smacks of songwriting torpor. Great at points though it may be, it’s an album hampered by an uncharacteristic lack of expansive vision – a semi-sour surprise from this band. Tournament of Hearts is, however, thankfully justified by enough excellent tracks to make its errors frustrating but not fatal. Though it pains me to think of the album as a more of a hold-over, it’s a solid hold-over from a band that one can trust to deliver greater future efforts.