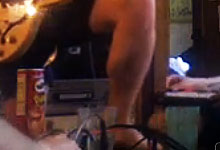 There are a few things to know about CMG. A) We, despite frequently claims to the contrary, are not major. We will neither make nor break anyone. Real PR institutions “get” this, and so pay us very little heed. The world continues to turn. B) We spend a lot of time on these reviews. It may or may not seem like this, but we do, which is why we don’t do very many of them. So if you kindly send us a record or track or something, we may truly enjoy it , but often we’re spending too much time on other shit that people apparently need to read our take on (say, the Hold Steady) and so just don’t get around to it. Please don’t be upset with us. See A) for reasons why.

However: C) If you ignore A) to the point that Intuition Orphan has, we will ignore B) and probably give you some press despite more reader-friendly options. Because, here: Intuition Orphan wrote a song about me. It’s called “Clayton Purdom.” So am I, and that’s weird. The only rough correlation between me and the given piece of music is that at one point they spell my name, although they claim it spawned from some dream involving me and Norm MacDonald. Who knows. It’s also worth noting that, unlike what remains (sorry, Intuition Orphan) the greatest song ever written about a Cokemachineglow writer, “Is This Childish Enough Sean Ford,” I have had some contact with the band at hand, mostly just saying what I said in the first paragraph here. We aren’t major but we are busy. Don’t fret us, we’re just worried about our own dicks. Best of everything.

For the record, I’m a little disappointed in myself that I didn’t inspire a song I like more. It’s good enough; it’s its own thing. From the nasal incantations and tense burbles we’ve clearly got a Subtle disciple here, and I wonder if they don’t realize I’m sorta the Subtle spoilsport on CMG’s staff. Or if they care! Lol. They sorta shot themselves in the flip-flop by sending me this VLOG a week later. Because nothing spoils a weird almost cultish mystique like knowing the druids at hand enjoy Pringles. Also, the video riff on chicks (or something) has even less to do with me than my song, which means at this point they’re just titling shit after me to see if I’ll bite. Whomp: I’m a slut. Write me a concept record and I’ll pitch you guys to the Chicago Reader.