Enjoy the droning approach of autumn as it comes to swallow us whole, to the sounds of: Danny Clay, Inner Travels, Nicolas Jaar, and more.

In honour of the passing of another April Fools Day, truly an asshole’s holiday, CMGcast #141 is dedicated to that one time seven years ago when the entire CMG staff boarded a blimp bound for good times and wound up dead. As recorded in the official CMG Timeline scroll, here are the events of April 2007, starting with Dom—the lone blimp accident survivor—immediately rushing back to our headquarters with a photo and every last, harrowing detail: 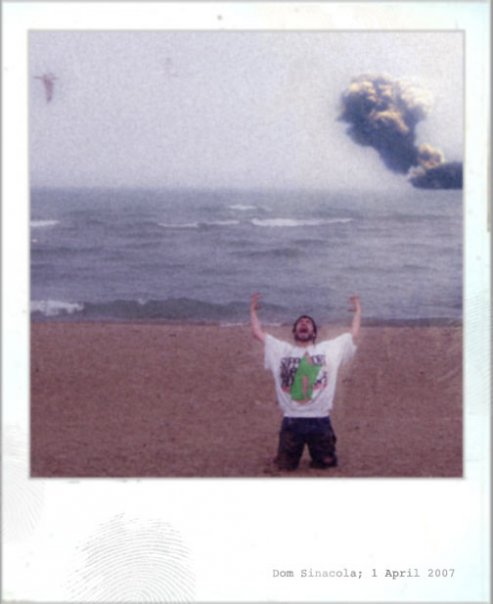 The last thing I remember, as we interlocked arms and started sobbing, was knowing that I was going to die. Somewhere toward the tail of the blimp something ruptured; the whole bulk of us was spinning heedlessly, shaken violently out of our flight path. Not that we all agreed that buying a blimp with money from the Canadian government was the best idea for Cokemachineglow, but Scott insisted (“What could possibly go wrong!”), and Mark already knew how to pilot a blimp, had 130 flight hours, had a tee-shirt that read, “I’d Rather be Blimpin’. ” That’s how the staff of Cokemachineglow would spend their Spring: spreading criticism and anecdote throughout the airspace of North American metropolii.

In August we applied for a grant from Canada, citing our work as journalists championing all manner of independent Canadian music. Surprisingly, it worked, and as we discussed how to update the server and bolster PR and pay our writers, the proceeds were enough for Scott to slink off and purchase his boyhood fantasy. The zeppelin wasn’t anything fancy, but it was big enough to bunk us, and, as Biggie had said, the sky was the limit. So, with adventure in our hearts, we quit our day jobs, quit our significant others, packed plenty of socks, and bought plenty of oversized aeronautic goggles. Mark practiced in his bathtub. Scott yanked his cream silk scarf out of storage. At one point, as we lined up to load the cargo hold, Kate asked, seemingly staring into the mess of helium inside the blimp’s tank, “Isn’t this dangerous?” Conrad nodded eagerly, so Clay slapped him across the face.

But only a day into our trip, the worst happened. Craig was pointing at a funny cloud, the cabin shuddered, he crashed into the small cubby window, and he broke his finger. Craig was screaming, and then a horrible pop burst from our backs. We were over Lake Michigan, tumbling to the cold, tumultuous table cloth of water, and we all had to admit that soon we would simultaneously explode.

Chris screamed, “I’m dying before Zeitgeist comes out? There is a God!” Clay looked at the floor, hugging his knees, muttering, “Never…transcribed…that Pharcyde interview…” Chet did his best to stand, puked, and mouthed over the din of speeding air, “Wu-Tang Forever.” Then everything whited out.

I awoke floating on my back, seaweed in my mouth. Ashes and hot debris rained down around me. I was alive! I was mostly unscathed! Praise Jesus…but where was everyone else? I flipped onto my stomach and began to paddle, testing my strength and the agility of my limbs. Everything felt fine, so I yelled out names. Nothing but the sound of waves and the hoary fizz of flames answered. I saw shore a few miles ahead of me, so I swam in that vast direction.

Exhausted, I crawled ashore. A man pushing a hotdog cart ran at me, taking photos. I spent the rest of yesterday shivering and talking to police and reporters. I shook the hand of every diver that set off into the lake to look for bodies. I changed my pants.

So that explains that.

Now I’m left to carry on the site. With every wound – physical and emotional – I salve, I will try to honor my dead comrades. There is nothing else left to do. But: Please, in this time of mourning, respect my privacy and continue to visit our (my) humble writings as they currently appear. I will return soon with more news.

APR. 2, 2007 :: The staff crawls, zombie-like, from their watery graves. Chet celebrates by smugly eating an arm, as a zombie would: 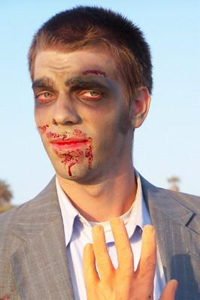 APR. 8, 2007 :: The staff receives an email asking why they no longer like music and wondering why the quality of the site was so much better last year.

APR. 14, 2007 :: Dave Goldstein sits to write a track review of the new National single and accidentally writes 1700 words on the Mets.

6. Have a Nice Life: “Music Will Untune the Earth”